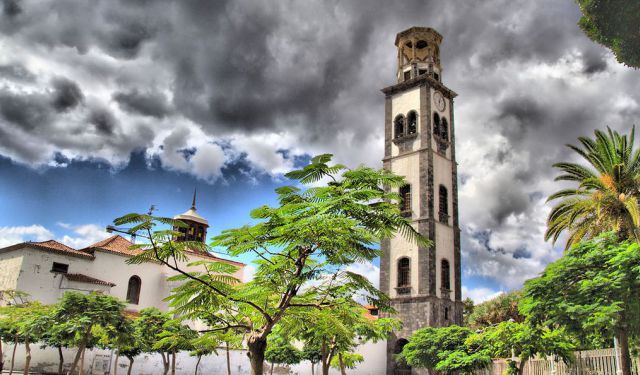 Image by cortto on Flickr under Creative Commons License.

Santa Cruz de Tenerife provides history enthusiasts with many sites located in the city’s historic center for perfect sightseeing. Grand Guimera Theater, Parroquia de la Concepcion, Palacio de Carta and other gems are among them. The Tenerife capital preserved its structures in magnificent condition. The tour also includes the earliest Tenerife fortification structures on the shore, which date back to the 17th century.
How it works: Download the app "GPSmyCity: Walks in 1K+ Cities" from iTunes App Store or Google Play to your mobile phone or tablet. The app turns your mobile device into a personal tour guide and its built-in GPS navigation functions guide you from one tour stop to next. The app works offline, so no data plan is needed when traveling abroad.

Casa de la Pólvora is situated near the Castillo de San Juan and Parque marítimo close to the sea. It serves as the canonry warehouse and fortification building along with the Castle of Saint John. It was built in the late 1750s. The structure has a rectangular plan and is roofed with a half-barrel vault. Casa de la Pólvora constructional material is black basalt rock and local quarry stone. It served for Santa Cruz’s defence during a century and a half.
Image by Mike Peel on Wikimedia under Creative Commons License.
2

was the second most important fort in the defense of Santa Cruz de Tenerife.

It was built in 1641 and is located near the Parque Marítimo César Manrique. It has a round tower facing the sea. Each year in July a re-enactment of the Battle of Santa Cruz de Tenerife of 25 July takes place, which commemorates the unsuccessful attempt by the British Admiral Horatio Nelson to invade the city and the archipelago.

Image by Mike Peel on Wikimedia under Creative Commons License.
Sight description based on wikipedia
3

Ermita de Nuestra Señora de Regla (The chapel of Our Lady of Rule) is located on the road opposite to the Auditorio de Tenerife. It served as the garrison chapel near the Castle of San Juan. It was one of the oldest Santa Cruz buildings constructed in 1643. This small red & white chapel is now closed to the public due to its dire state. Its treasure, the image of Our Lady of Rule, is found in Ermita de San Telmo (Chapel of San Telmo). It unpretentious structure features the double-bell tower dominating the entrance, rose window and simple tracery.
Image by rene boulay on Wikimedia under Creative Commons License.
4

The Iglesia-Parroquia Matriz de Nuestra Señora de La Concepción is a Catholic church located in the city of Santa Cruz de Tenerife. It is the only church in the Canary Islands have five naves.

This church was built upon the first chapel erected by the Spanish conquistadors after landing on the coast where they would later build the city. This church is the main temple of the city, which is why it is called "the Cathedral of Santa Cruz. However, it not is a cathedral; the Cathedral of La Laguna is the cathedral of Tenerife.

The Iglesia de la Concepción is dedicated to the Immaculate Conception of the Virgin Mary. In this church is the image of St. James (patron saint of Santa Cruz de Tenerife). Inside the church is kept the cross that gave rise to the founding of the city.

The architectural style of the church is baroque and Tuscan. The bell tower is the most identifiable part of the church. The Church of the Conception has been declared a site of cultural interest.

Image by Cabareste on Wikimedia under Creative Commons License.
Sight description based on wikipedia
5

Teatro Guimerá is the oldest theater in the Canary Islands.

Founded in the 19th century. The first known as Teatro Municipal de Santa Cruz de Tenerife, first built in 1849 by the architect Manuel de Oráa and in classical-romance style, it was first opened two years later on January 1851, it underwent several works in the interior decoration in 1888 and other occasional improvements in 1895, 1899, 1901, 1905 and in 1908 and accommodated largely in the ending of the conclusion of the original project of Oráa.

It underwend important works of modification in 1911, headed by Antonio Pintor, and it took two years to complete. These works saw a total renovation and the structute as well as the outside of the building were intact. Since 1923, after the death of Ángel Guimerá, the theatre was named in honor of a Tinerfeño dramaturgist.

The building which had been done for 150 years, the theatre provided many actors and actresses, ballets, orchestras, musical companies, congresses have taken place. Between these events it forms a part of the Canary Islands Music Festival.
Image by Koppchen on Wikimedia under Creative Commons License.
Sight description based on wikipedia
6

Palacio de Carta belongs to Plaza de la Candelaria in the city center. It was a significant building in the city in the 18th century. It was built in 1752 by the order of Matías Rodríguez Carta as a residence for military commanders. Then it was a government administration office and a bank headquarters. The structure represents a mixture of Baroque and Neoclassic styles. It has a couple of interior courtyards typical of the region. This 3-storey building features balconies, a façade in quarried stone, a clock on the third level and a pediment. The site of Palacio de Carta received the status of Place of Cultural Interest in 1947, and was the first protected building in the Canary Islands.
Image by CARLOS TEIXIDOR CADENAS on Wikimedia under Creative Commons License.
7

Parroquia de San Francisco (Church of San Francisco) is located in Plaza del Principe in the city center. Originally the church was the Franciscan convent. Today it is a Catholic temple. The building of the church took place in the 17th and 18th centuries. It is made in Island Baroque architectural style, and has three naves. The front of the Church of San Francisco features two Corinthian capitals at the entrance with the image of Nuestra Señora de la Soledad (Our Lady of Solitude) above it. The sanctuary has figures of La Inmaculada of the 19th century, San Francisco de Asis, Santo Domingo of the 17th century, the Master of the Ordeals, and more artifacts of religious and artistic value. Parroquia de San Francisco is one of the most important religious buildings in Santa Cruz de Tenerife.
Image by Koppchen on Wikimedia under Creative Commons License.
8

This parish church is located in the historical and commercial center of the city. It was conducted by missionaries headed by Father Claret. The temple was constructed in the 18th century. Its structure comprised one nave and a chapel. Two side chapels were added later. The historic meeting of the local manufacturers took place here just after Nelson’s attempt of invasion in 1797. Santa Cruz got the status of Exempt Town that led to its subsequent growth. The most known treasures of Iglesia del Pilar are the Baroque chancel table and the statue of the Virgen de las Angustias.
Image by karel291 on Wikimedia under Creative Commons License.
9

Iglesia de San Jorge (Church of San Jorge) is situated on Calle Viera Y Clavijo, near Plaza de los Patos. The former Anglican Church was built at the end of the 19th century. Its structure features the Latin-cross plan, lancet openings, cross-gabled roof and cut-stone façade. Inside the church the traditions of the Anglican architecture are also perceptible in the design of its nave and aisles, wooden framework and multiple wooden elements, as well as stained–glass windows.
Image by Diego Delso on Wikimedia under Creative Commons License.
10

The parish church of San Jose is located in the northern part of the city. The impressive structure features arched openings, a portico entrance guarding the two-sided campanile, apartment houses in its wings and on the back side. Its architectural style can be referred to as Baroque and Tuscan. The temple possesses an important bibliographical heritage. These are folios and missals in Latin from the 18th and 19th centuries, that were used for divine services to the Council.
Image by Koppchen on Wikimedia under Creative Commons License.

Santa Cruz de Tenerife, the capital city, features a variety and multiplicity of museums and art establishments. These reflect the history and heritage of Tenerife Island. Museum of Nature and Man, Museo Municipal de Bellas artes, Museo Militar Regional de Canarias and TEA are world renowned. Explore the popular tourist attractions in their own right with this self-guided walk.