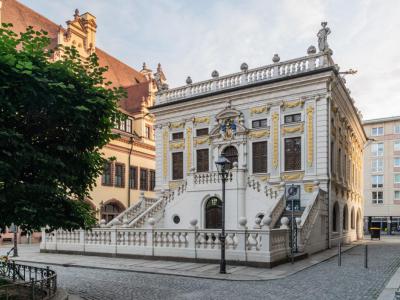 The Alte Handelsbörse or Alte Börse (Old exchange) in Leipzig, Saxony, Germany, is the city's oldest assembly building of merchants, and also the oldest Baroque building. Built as the Börse in 1678, it is now used as an event venue and is known in English as the Old Stock Exchange.

Leipzig has always been an important trading center, being at the intersection of two historical trade routes, and trade fairs have been held here for nearly a millennium. The initiative to build a Börse, as a neutral exchange place to conduct business and seal deals, came in 1667 from 30 major merchants after complaints by foreign merchants. The city council took the decisive decision to build the Börse on 6 May 1678.

The building was probably designed by Johann Georg Starcke, a master builder at the court of John George II, Elector of Saxony, in Dresden. Construction began at the Naschmarkt adjacent to the Old Town Hall on 30 May 1678. The Börse was used already from 1679, but the artwork in the interior was completed only in 1687. The ground floor had rooms rented to merchants, the upper floor offered a hall, Börsensaal, for auctions, balls and other events.

During the Second World War, the Börse burnt down completely in 1943, resulting in the irretrievable loss of the valuable stucco ceiling and ceiling paintings. The building was secured with an emergency roof. Restoration of the exterior began in 1955, completed in 1962. Since then, the Alte Börse has been used for cultural events such as readings, concerts and exhibitions. Between 1992 and 1995, the facade and the interior were extensively renovated, with a focus on the original coloring of the facades and the window glazing in the style of the 17th century.
Image Courtesy of Wikimedia and Krzysztof Golik.
Sight description based on Wikipedia.