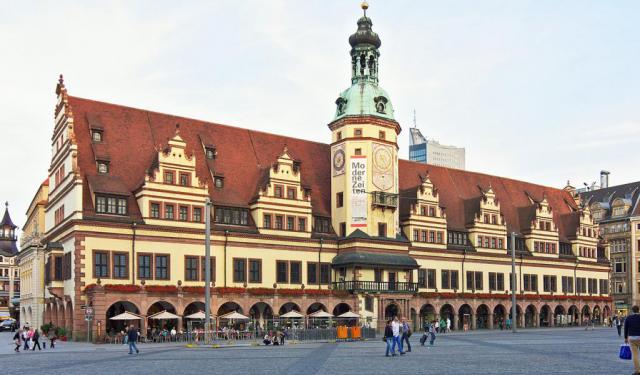 Anyone who wants to delve into Leipzig's interesting history should see its collection of the most beautiful Renaissance buildings in Germany. The city has many impressive historic monuments and contemporary constructions by world famous architects. Take this tour to discover Leipzig’s most amazing architecture.
Image Courtesy of Wikimedia and Appaloosa.
How it works: Download the app "GPSmyCity: Walks in 1K+ Cities" from iTunes App Store or Google Play to your mobile phone or tablet. The app turns your mobile device into a personal tour guide and its built-in GPS navigation functions guide you from one tour stop to next. The app works offline, so no data plan is needed when traveling abroad.

Located on the road to Bruehl, the history of the Romanus House dates back to 1703. Named after owner Conrad Romanus, with an ornate facade, it is one of the finest Baroque buildings still standing. Today, this building represents a milestone in Saxon Baroque architecture and is well worth visiting.
Image Courtesy of Wikimedia and Appaloosa.
2

Fregehaus is a baroque building in the center of Leipzig. Initially it was built in Renaissance style, and was rebuilt in its actual form by architect Johann Gregor Fuchs in 1706. The name of the house comes from the banker Christian Gottlob Frege II, who acquired it in 1782. The house was renovated between 1980 and 1986 and nowadays houses a hotel.
Image Courtesy of Wikimedia and Geisler Martin.
3

Located on the north side of Market Square, the Old Weighing House, was built in 1555 by Hieronymus Lotter, at the same time as the Town Hall. It was the center of activity during trade fairs, as the revenue from weighing charges was a source of money for the city.
Image Courtesy of Flickr and Jaime Silva.
4

One of Germany’s most important Renaissance town halls, Altes Rathaus, founded in 1557, is one of the city’s most beautiful attractions. Located on the main square, it houses a museum of Leipzig's history. It is worth seeing for its beautiful Renaissance interior and presentations of the city’s history and art.
Image Courtesy of Flickr and randwill.
5

Also known as the “House with the Elephants,” Riquet House’s architecture is a mix of Art Nouveau and oriental styles. Built at the turn of the 20th century, it housed an oriental trading company which imported goods from China and Japan. Now a restaurant, wine cellars and a cafe, it serves homemade goodies with an historical ambiance. The entrance attracts attention with its beautiful roof and two elephant heads.
Image Courtesy of Flickr and Klaus Reischle.
6

The interior of Specks Hof, built between 1909 and 1929, is a mix of Art Nouveau and modern elements, with beautiful figures symbolizing themes from Greek mythology. Nowadays, it houses restaurants, offices, shops and art galleries. Be sure not to miss the three atria, one of the most amazing features of this passage arcade.
Image Courtesy of Wikimedia and C-M.
7

Image Courtesy of Wikimedia and Appaloosa.
Sight description based on Wikipedia.
8

Built in 1928 by the Jewish family Kroch, Kroch-Hochhaus was Leipzig's first steel high-rise structure. Its main feature is the belfry, a design reminiscent of the watchtower in Venice. The bell, rung by two bronze men with hammers, tolls every fifteen minutes and has become a landmark. Across the top of the building are the words "omnia vincit labor" which translates from Latin as "work overcomes all."
Image Courtesy of Wikimedia and Marvel.
9

City-Hochhaus (literally: City High-rise), at a height of 142.5 metres, is the tallest building in the city of Leipzig, and the tallest multistory building erected in the former East Germany. It was designed by architect Hermann Henselmann in the shape of an open book, and built between 1968 and 1972. It followed Henselmann's idea to cap central places in cities with a prominent tower, such as the Jen-Tower in Jena and Fernsehturm in Berlin. It was originally part of the University of Leipzig campus at Augustusplatz, was sold by the state government of Saxony and is now owned by the U.S. investment bank Merrill Lynch.

The building was completely renovated between 1999 and 2002, when it lost its aluminium sheathing which was replaced by grey granite. The offices are now rented to private tenants including the public broadcaster MDR, the European Energy Exchange and the Panorama restaurant. The roof is equipped with a viewing platform. The building is nicknamed in vernacular as "Weisheitszahn" (wisdom tooth) due to its form or after its previous function as "Uniriese" (university giant).

Image Courtesy of Flickr and Todd J. Hill.
Sight description based on Wikipedia.