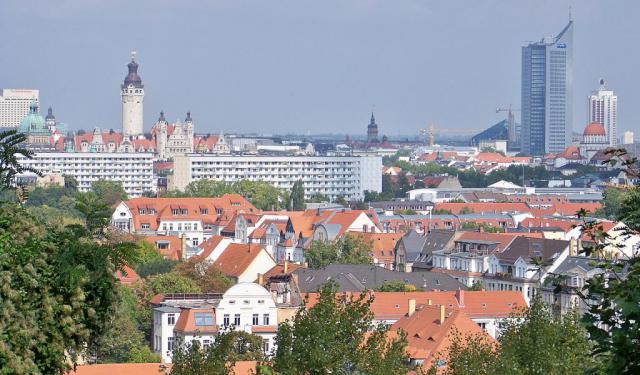 Leipzig is renowned for its traditions, distinctive art and cultural heritage manifested in a number of landmarks fit to impress even the most well-traveled visitor. The city boasts some truly magnificent pieces of architecture; with the help of this orientation walk you should be able to find them with ease and have the best of time in Leipzig.
Image Courtesy of Wikimedia and Joeb07.
How it works: Download the app "GPSmyCity: Walks in 1K+ Cities" from iTunes App Store or Google Play to your mobile phone or tablet. The app turns your mobile device into a personal tour guide and its built-in GPS navigation functions guide you from one tour stop to next. The app works offline, so no data plan is needed when traveling abroad.

One of Germany’s most important Renaissance town halls, Altes Rathaus, founded in 1557, is one of the city’s most beautiful attractions. Located on the main square, it houses a museum of Leipzig's history. It is worth seeing for its beautiful Renaissance interior and presentations of the city’s history and art.
Image Courtesy of Flickr and randwill.
2

Image Courtesy of Wikimedia and Appaloosa.
Sight description based on Wikipedia.
3

The Leipzig Opera traces its establishment to the year 1693, making it the third oldest opera venue in Europe after La Fenice (Venice, Italy) and the Hamburg State Opera (Hamburg, Germany). The Leipzig Opera does not have its own opera orchestra, and the Leipzig Gewandhaus Orchestra performs as the orchestra for the opera. During an air raid in the night of December 3, 1943, the theater was destroyed, as were all Leipzig's theatres. Construction of the modern opera house began in 1956. The theatre was inaugurated on October 8, 1960, with a performance of Wagner's Die Meistersinger von Nürnberg.
Image Courtesy of Flickr and profstewartrk.
Sight description based on Wikipedia.
4

Augustusplatz, a square located at the east end of the city center, began construction in 1785 as Platz vor dem Grimmaischen Thor, designed by city architect Johann Carl Friedrich Dauthe. Renamed Augustusplatz in 1839 after Frederick Augustus, the first king of Saxony, it is the city's largest square and one of the largest in the country. Prior to its bombing in the Second World War, it was one of Germany's most beautiful squares. It is also a central hub for the tram network.
Image Courtesy of Wikimedia and Oliver Storch.
Sight description based on Wikipedia.
5

Mende Fountain, which stands in front of Gewandhaus, was built by Adolf Gnauth from 1883 to 1886. Pauline Mende, a rich widow, donated the Neo-Baroque figures and the fountain was named after her. Located on Augustusplatz, it depicts figures from Greek Mythology. Mende Fountain is definitely worth a visit.
Image Courtesy of Wikimedia and Andreas Praefcke.
Sight description based on Wikipedia.
6

The Peter Street is a street in the city center of Leipzig . It is one of the many-frequented business streets of East Germany.
The Petersstraße is 366 meters long and connects the market in north-south direction with the Wilhelm-Leuschner-Platz . At their southern end were until 1860 the Peterstor and until 1886 the named Peterskirche . To the south on the former Peterstor it was a continuation of the Peterssteinweg.
Image Courtesy of Flickr and Ed S. Johovac.
Sight description based on Wikipedia.
7

St. Thomas Church, a Lutheran church, is most famous as the place where Johann Sebastian Bach worked as a cantor, and where his remains currently lie. Between 1212 and 1222 the former church became the St. Thomas Monastery of the Augustinian Order. In 1217, Minnesinger Heinrich von Morungen bequeathed a relic of St. Thomas following a trip to India. After several reconstructions, the current late Gothic building was consecrated by Thilo of Trotha, the Bishop of Merseburg, on April 10, 1496.
Image Courtesy of Flickr and lostajy.
Sight description based on Wikipedia.
8

Since 1905 Neues Rathaus (New City Hall) has been the seat of Leipzig’s city council. After several plans were rejected, the city was acquired by the Kingdom of Saxony in 1895, the Pleissenburg site to build the new city hall of Leipzig. Several design competitions were held, a condition of which was that the silhouette of the Pleissenburg tower, a known landmark, be preserved. On the southwest facade are five statues by different artists, including Adolf Lehnert and Joseph Magre. Its clock contains the Latin inscription "Mors certa, hora incerta" (Death is certain, the hour uncertain).
Image Courtesy of Wikimedia and Manecke.
9

St. Peter Church, a Lutheran church founded in 1885, was designed by architects Hartel and Lipsius in the Neo-Gothic style. The interior houses many old sculptures of the Apostles and the altar is adorned with carved figures and paintings. The church also possesses the highest tower in the city.
Image Courtesy of Wikimedia and Johannes Kazah.