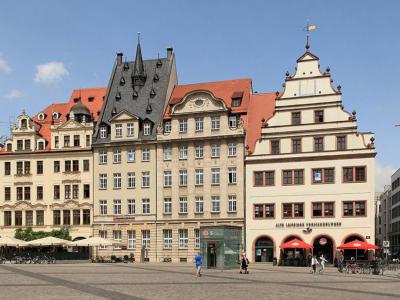 On the north side of Leipzig's Market Square on the corner of Katherine Street is Old Scale House (Alte Waage). The Council Scales (Rats Waage) was the core of the Leipzig Trade Fair in the 16th century. All goods had to be weighed here. A duty was collected to be shared by the city and the king.

The Scale House was constructed in 1555, as directed by the Mayor of Leipzig, Hieronymus Lotter. It was built in the Renaissance style by master builder Paul Speck. The front had a four-tiered voluted gable and a sundial. Below this was a stair tower. There were two upper floors, above the basement ground floor and attic floors. The basement held the council bar and a drinking room.

The Old Scale House became a commercial building. From 1590, the house was the seat of the Leipzig Council Post with the messenger room. The post office was housed here from 1661 to 1712. Weighings were transferred to a new location in 1820. In 1861, during renovations, the stair tower was removed. The building was destroyed in the air raid of December 1943 and was undeveloped for a few years.

In 1964 the Scale House was built anew as designed by Leipzig architect Wolfgang Muller. The entire structure, including the Katherine Street side facade, is new. Only the south side gable was fashioned in the Renaissance style.
Image Courtesy of Wikimedia and Frank Vincentz.