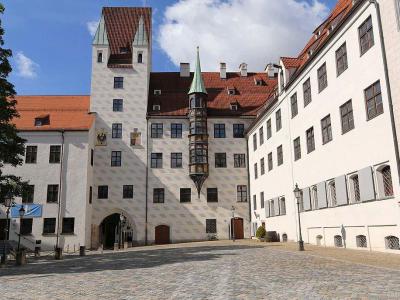 The Alter Hof (Old Court) of Munich is the former imperial residence of Louis IV, Holy Roman Emperor, and had been the seat of the Imperial Family for over 150 years until 1474, when it was moved to the nearby Residenz Royal Palace. After the first partition of Bavaria in 1255, the Alte Hof became the residence of Louis II, Duke of Bavaria in the then very northeastern part of the city. It was the first permanent imperial residence in the Holy Roman Empire under his son Louis IV, Holy Roman Emperor.

The complex consists of five wings, namely: Burgstock, Zwingerstock, Lorenzistock, Pfisterstock and Brunnenstock, of which Burgstock, on the west side, is the most picturesque. Adolf Hitler is said to have painted it once. The St. Lorenz Chapel on the north side, which was demolished in the 19th century, once housed the regalia of the House of Wittelsbach which had ruled Bavaria for over 700 years.

Archaeological excavations revealed that a castle already existed on this site in the 12th century, making it the oldest surviving medieval structure in Munich. Like most of the Old Town, the Alter Hof has been extended and rebuilt several times throughout history, including major restoration work carried out in the 19th century and after World War II. Contrary to the western façade with its Neo-Classical style, the north façade carries Neo-Gothic ornamentation.

Today, a portion of the castle houses local government offices, while the west wing is occupied by the Vinorant Alter Hof, a popular restaurant and wine cellar. In summer, the inner courtyard, flanked by Renaissance arcades, often plays host to open-air concerts and theatrical performances.
Image by Bbb on Wikimedia under Creative Commons License.
Sight description based on wikipedia