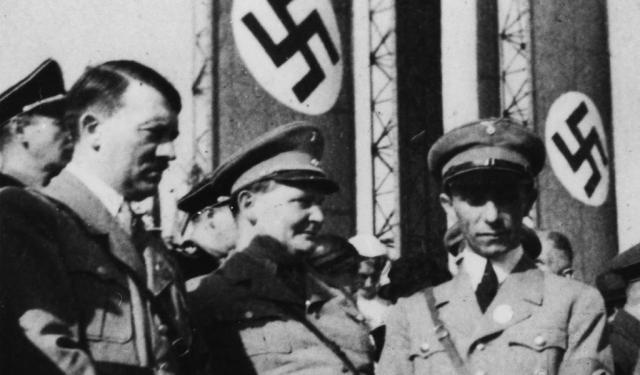 Image by randomduck on Flickr under Creative Commons License.

It was in Munich that Hitler had made his first attempts at grabbing power. The walking tour explores the places and events that are related to the Nazi movement. It traces the events from the first mass meetings at the Hofbräuhaus to the failed attempt to seize power at the Felderrnhalle.
How it works: Download the app "GPSmyCity: Walks in 1K+ Cities" from iTunes App Store or Google Play to your mobile phone or tablet. The app turns your mobile device into a personal tour guide and its built-in GPS navigation functions guide you from one tour stop to next. The app works offline, so no data plan is needed when traveling abroad.

The Marienplatz is a square that marks the heart of the city of Munich. It has been the main square of the city from the year 1158.

The Square was first known as the Schrannen. It got the name Marienplatz after citizens prayed to the Holy mother for deliverance from a cholera epidemic. The large column with the gilded figure of Mother Mary on the top was erected in 1638 as part of the celebrations marking the end of the Swedish occupation of the city. It was the main square where events, tournaments and public executions took place in Munich.

The New City Hall dominates Marienplatz today. The Flemish Gothic style building was constructed between 1867 and 1909 and was designed by the architect, Georg Joseph Hauberrisser. The internationally famous Carillon in the tower has figures depicting the history of the city. The lower part has figures performing the Schäfflertanz or Cooper’s dance that was arranged in 1517 as part of the celebrations of the end of a plague epidemic that swept through the city. Visitors can view the dance daily at 11am and 12 and 5pm. The Old City Hall was not demolished to make way for the New City Hall and still stands on the eastern side of Marienplatz.

Why You Should Visit:
Perfect first spot to discover Munich. Historic, architecturally attractive and vibrant, filled with locals and tourists alike, it never lacks for excitement throughout the day. And, like the rest of Munich, it's spotlessly clean.

Tip:
Many walking tours start here in the mornings and afternoons. Join one and learn more about Munich's history and legends.
A tip for eating out is to walk a block or two away as the prices drop dramatically. Besides, the local food market is right outside the gate with many restaurants serving food from all over the world.


Image by Robert Theml on Wikimedia under Creative Commons License.
Sight description based on wikipedia
2

The Beer Hall is probably the best-known beer hall in Munich. Originally built in 1607, the building has been reconstructed and restored as recently as 1958. Massive in size, the beer hall is steeped in history and on 24 February 1920, Adolf Hitler organized one of his first propaganda events here. The beer served here is from the Staatliches Hofbräuhaus brewery. They serve Bavarian delicacies like the roast pork, sausages and knuckle of pork. Bavarian music is played during regular hours.
Image by johnnymnemonic84 on Flickr under Creative Commons License.
3

The Feldherrnhalle or Field Marshall’s Hall is a large loggia built to commemorate two brave Bavarian military leaders and the soldiers who laid down their lives during the Franco Prussian War. It is best remembered for the skirmish between the Bavarian Police and Hitler’s followers in 1923, called the Beer Hall Putsch.

The Feldherrnhalle was commissioned by King Ludwig I of Bavaria and designed by Friedrich von Gartner. It was built between 1841 and 1844 on the site of one of the old city gates, the Schwabinger Tor. The design was modeled along the lines of the Loggia dei Lanzi in Florence. It is located at the southern end of Ludwigstrasse, near the Palais Preysing.

The Feldherrnhalle has large bronze statues of two revered Bavarian military heroes, Johann Tilly and Karl hilipp von Wrede, created by sculptor Ludwig Schwanthaler. In 1882, another sculpture to pay tribute to the Bavarian army’s exploits in the Franco Prussian war was created by Ferdinand von Miller Jr. and placed at the center. The steps leading up to the monument has two lions sculpted by Wilhelm Ruemann in 1906. The growling lion sculpture faces the Residenz Royal Palace while the other lion, with its mouth closed, faces the church. It was at this spot that Hitler and his followers were arrested by the Bavarian police after the Beer House Putsch.
Image by Holger Weinandt on Wikimedia under Creative Commons License.
Sight description based on wikipedia
4

The Hofgarten is a peaceful green oasis in the center of Munich. It is located between the Residenz Royal Palace and the English Garden.

The Hofgarten was commissioned by the elector Maximilian I and laid in Italian Renaissance style between 1613 and 1617. It is landscaped around two central paths that intersect at a pavilion called the Temple of Diana. The Pavilion was designed by Heinrich Schön the elder in 1615. Originally a sculpture of Bavaria created in 1623 by Hubert Gerhard was placed on its roof. Today, only a replica tops the temple of Diana and the original is preserved in the Residenz Royal Palace. The Hofgarten was destroyed during the Second World War and rebuilt based on the original landscape plans.

The Hofgarten, today preserves its original 17th century ambiance. The lawns and flower gardens are beautifully laid out. The original waterworks were restored and the fountains are once again fully functional. On the northeast corner of the garden is a square black granite monument. It is a memorial to the White Rose group consisting of philosophy students who were executed after a sham trial for conducting a non violent struggle against the Nazi regime. The Hofgarten is mentioned in T.S.Eliot’s poem, ‘The Wasteland’, as a symbol of the dying royal families of Europe and the emptiness of aristocratic life.

The Munich War Memorial is located adjacent to the Hofgarten. The memorial inscription that was added after WWII remember the 22000 dead, 11000 missing Munich soldiers and 6600 victims of the Allied bombing attacks.
Image by Oliver Kurmis on Wikimedia under Creative Commons License.
Sight description based on wikipedia
5

The Haus der Kunst is an art museum that was built during the Third Reich as an example of Nazi architecture and as a means of Nazi propaganda. It is used today as a venue for trade shows and visiting art exhibitions, and houses a popular high-end nightclub called P1.

The Haus der Kunst was designed by architect Paul Ludwig Troost. It was constructed between 1933 and 1937. The first major exhibition here was the Grosse Deutsche Kunstausstellung, or Great German Art Exhibition, displaying works that the Third Reich considered Germany’s best examples of art. Unlike most other buildings in Munich, it survived the World War II bombings with little damage. After the war, it was occupied by the US and allied forces and used as an officer’s mess.

The original purpose of the Haus der Kunst can still be seen through the swastika motifs on the ceiling and portico. It became a museum again in 1946 and the large exhibition halls were partitioned into smaller rooms. The first major exhibition after the Third Reich was held in 1949, featuring works of contemporary artists, like Picasso, Kadinsky, Braque and others, that were banned by the Nazi regime. The purpose of the exhibition was to shake of the past where contemporary art was condemned as degenerate art.

The Führerbau - translated as "the Führer's building" - is a Nazi party building located in Königsplatz and was built from 1933 to 1937 after the plans of architect Paul Ludwig Troost. The first plans were made in 1931. The building was completed three years after Troost's death by Leonhard Gall. During the Nazi times, the building served as a representative building for Adolf Hitler. The Führerbau has historical significance for being the place where Neville Chamberlain and Adolf Hitler signed the Munich treaty in September 1938. Architecturally speaking, the Brienner Strasse is a symmetry axis - at the Katharina-von-Bora-Strasse 10, a very similar building stands: The "Verwaltungsbau der NSDAP" (Administrative Building of the NSDAP). After the German surrender, the US occupation forces used both buildings as the "Zentrale Sammelstelle" (central collecting place) that cared about the looted pieces of art that were stolen by Nazis in the whole of Europe. Today, the building houses the Hochschule für Musik und Theater (University of Applied Sciences of Music and Theatre). Its congress hall now serves as a concert venue.
Image by OlivierCotton on Wikimedia under Creative Commons License.
Sight description based on wikipedia

The Southern part of the Alstadt consists of 2 quarters: the Hackenviertel in the south west and the Angerviertel in the south east. It lies between the two historic towers: the Sendlinger Tor and the Isartor, two of four main gates of the medieval city wall. The area is home to famous museums and beautiful churches, but also to the oldest shopping street of Munich, Sendlinger Strasse.