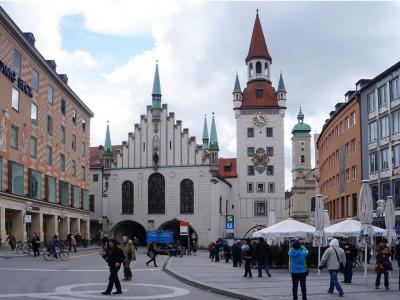 The Old Town Hall was the seat of the Municipality of Munich until the construction of the Neues Rathaus in 1874. It stands on the eastern side of Marienplatz and was left untouched, unlike many other buildings that were demolished to make way for the New Town Hall.

The Old Town Hall was built between 1470 and 1480 based on a design by architect, Jörg von Halsbach. The renowned architect also designed the Frauenkirche in Munich. It had a late Gothic style at the time of its construction. It was remodeled several times and was altered to a neo-Gothic style between the years 1861 and 1864. Two tunnels were built through the building to make way for traffic between 1877 and 1934. It was the venue of the famous speech of Joseph Goebbels that led to the attack on German Jews called Kristallnacht and marked the beginning of the Holocaust. The Altes Rathaus was severely damaged during the World War II bombings and was extensively restored based on its 15th-century design.

The Altes Rathaus, today, hosts the offices of the city council, some administrative offices and a Toy Museum set in four rooms in its tower. There is a souvenir & gift shop on the first floor that sells unique souvenir items – in particular replicas of the wooden sculptures called The Morris Dancers by Munich sculptor, Erasmus Grasser.

Why You Should Visit:
One of the finest historical buildings to see at Marienplatz. Just as with the other ('new') town hall, you can go up the stairs to the top. The inside on the ground floor is absolutely gorgeous too, looking exactly how many expect German buildings to look.

Tip:
The Altes Rathaus tower now serves as a Toy Museum (Spielzugmuseum) and providing yet another bit of fun is the Juliet Capulet Statue, located on the side of the building. This was a gift from the city of Verona to Munich in the 1970s.

The Lehel is regarded as "the oldest suburb" of Munich. It is home to The State Museum of Ethnology, the second largest collection in Germany of artifacts and objects from outside Europe, the Bavarian National Museum and the adjoining State Archeological Collection, the Schackgalerie - an important gallery of German 19th-century paintings and the Englisn Garden.

Graggenauviertel is one of the four quarters of Munich Alstadt. The gentry preferred to reside here, probably because of the proximity to the Alten Hof. Take this tour to admire the beautiful landmarks and famous cultural venues, explore the specialty shops and relax in a bar.

Munich's nightlife is an attraction in its own right. There's no shortage of quality entertainment in the city amid its industrial areas reconstructed into funky nightlife zones. Maxvorstadt neighborhood, otherwise known as the "Brain of Munich" due to the dense presence of artistic and educational institutions, carries much weight in terms of night fun just as well. Should you...  view more