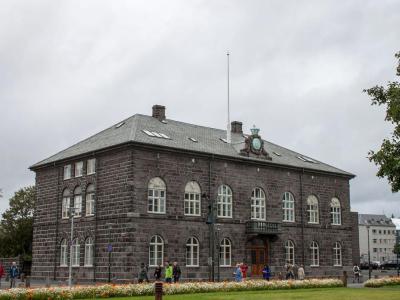 Reliefs on the tympanums represent Iceland's four Land Spirits. The dragon, a vulture, a bull, and a giant represent these traditional Norse spirits. On the north side of the building, visitors will notice King Christian IX's crown and crest.

The Parliament House is home to Althingi, the Icelandic parliament. In the past, it was also used to house the University of Iceland and the offices of the President of Iceland.

Althingi was first held in Iceland in 930, and as such, is one of the oldest parliamentary institutions in the world. Meetings have been held at the Parliament House since 1884. Today, Parliament uses the debating chamber, meeting rooms, and staff offices. Parliamentarian's offices and larger meeting rooms are located in other buildings.

The charming garden behind The Parliament House is the oldest public garden in Iceland.
Image by Szilas on Wikimedia under Creative Commons License.