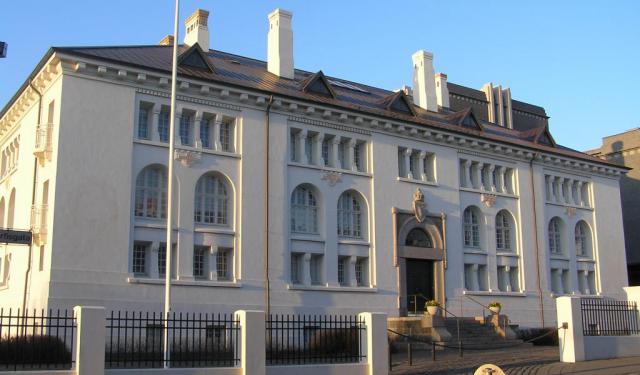 Relatively small in size, the Icelandic capital has no shortage of surprises appealing to people with a wide variety of interests. History buffs will certainly be impressed by the city’s old buildings and relics of its Viking and medieval past.

The places commemorating founders and leaders of various sort, as well as important events in the country, are within a walking distance in the thriving downtown area. Here are some of the historical sights in Reykjavik to be visited while strolling around the city:

Althingishus – the Parliament House built in 1881, one of the oldest stone buildings in Iceland.

The Settlement Exhibition – features the remains of a hall from the Settlement Age (10th century AD), excavated in 2001.

Stjórnarráðshúsið – home to the Prime Minister's Office, originally built as the first dungeon in Iceland, back in the mid 18th century.

Hofdi – a Reykjavík house best known as the location for the 1986 summit between Ronald Reagan (USA) and Mikhail Gorbachev (USSR).

To broaden your knowledge of Iceland's history and culture, and to discover the historic spots in Reykjavik that you may probably have never heard of, check out this self-guided walking tour and make your stay in the city more enjoyable.
Image Courtesy of Wikimedia and Dougsim.
How it works: Download the app "GPSmyCity: Walks in 1K+ Cities" from iTunes App Store or Google Play to your mobile phone or tablet. The app turns your mobile device into a personal tour guide and its built-in GPS navigation functions guide you from one tour stop to next. The app works offline, so no data plan is needed when traveling abroad.

Reliefs on the tympanums represent Iceland's four Land Spirits. The dragon, a vulture, a bull, and a giant represent these traditional Norse spirits. On the north side of the building, visitors will notice King Christian IX's crown and crest.

The Parliament House is home to Althingi, the Icelandic parliament. In the past, it was also used to house the University of Iceland and the offices of the President of Iceland.

Althingi was first held in Iceland in 930, and as such, is one of the oldest parliamentary institutions in the world. Meetings have been held at the Parliament House since 1884. Today, Parliament uses the debating chamber, meeting rooms, and staff offices. Parliamentarian's offices and larger meeting rooms are located in other buildings.

The charming garden behind The Parliament House is the oldest public garden in Iceland.


Image Courtesy of Wikimedia and Szilas.
2

This site has been dedicated to churches since the 13th century. Work on the current church began in 1788, and the Reykjavik Cathedral was dedicated in 1796. It was the first building to be completed with the notion that Reykjavik would become the capital of Iceland.

Since 1845, each parliament session begins with mass at the Cathedral, and then members of parliament go together to the parliament house.

The church and Parliament are intertwined and are a central facet of life in Iceland.

The organ was built in Berlin in 1985 and has 31 voices and three manuals. Sculptor Albert Thorvaldsen designed the baptismal font. Leifur Breiofjoro, an Icelandic artist, designed the processional cross.

Reykjavik Cathedral is smaller and less imposing than the Church of Hallgrimur. However, it boasts a rich cultural history and has significant meaning in the daily lives of Iceland's Lutherans. The Christmas mass is broadcasted from Reykjavik Cathedral, and people all over the country tune in to listen to it. New Presidents are inaugurated at Reykjavík Cathedral.
Image Courtesy of Flickr and Luc Coekaerts.
3

3) The Settlement Exhibition (must see)

The Settlement Exhibition Reykjavík 871±2 is an exhibition on the settlement of Reykjavík, created by the Reykjavik City Museum. The exhibition is based on the archaeological excavation of the ruin of one of the first houses in Iceland and findings from other excavations in the city centre.

The focus of the exhibition is the remains of a hall from the Settlement Age which was excavated in 2001. The hall was inhabited from c. 930–1000. North of the hall are two pieces of turf, remnants of a wall which was clearly built before 871±2, hence the name of the exhibition. Such precise data dating is possible because a major volcanic eruption from the Torfajökull area spread tephra across the region and this can be dated via glacial ice in Greenland. The hall is among the oldest human-made structures so far found in Iceland. Also on display are objects from the Viking Age found in central Reykjavík and the island of Viðey.
Image Courtesy of Wikimedia and Szilas.
Sight description based on Wikipedia.
4

The Fríkirkjan Church, also known as Free Church in Reykjavik, is a church which is apart from the State Church. It is an independent Lutheran Free Church of Iceland. It lies in the center of the Icelandic capital, by the lake Tjornin.

The church congregation was established in Reykjavík in the autumn of 1899. It had an initial membership of 600 which soon rose. The rising population of Reykjavík and the concomitant social changes also contributed to its growth.

Shortly after the new congregation was founded, a suitable site for a new church was chosen at the east of the lake. The church was consecrated on 22 February 1903. Only two years later the church was lengthened, to a design by architect Rögnvaldur Ólafsson. In 1924 the church was enlarged again. A chancel was built of concrete at the eastern end, and various alterations were built on either side of the forechurch, supervised by master builder Guðmundur H. Þorláksson.
Image Courtesy of Wikimedia and TommyBee.
Sight description based on Wikipedia.
5

Menntaskólinn í Reykjavík (often abbreviated MR; official name in English: Reykjavik Junior College) is the oldest gymnasium (Icelandic: Menntaskóli) in Reykjavík. The school traces its origin to 1056, when a school was established in Skálholt, and it remains one of the oldest institutions in Iceland. The school was moved to Reykjavík in 1786, but poor housing conditions forced it to move again in 1805 to Bessastaðir near Reykjavík.

In 1846 the school was moved to its current location, and a new building was erected for it in Reykjavík. This was the largest building in the country at the time and can be seen on the 500 Icelandic krona bill. It was used initially when national parliament began to meet again in Reykjavík after a few years hiatus. It is in this building where Icelandic independence leader Jón Sigurðsson led the MPs in their famous phrase, 'Vér mótmælum allir (We all protest".

The building's storied history makes it an important historical landmark in the country.
Image Courtesy of Wikimedia and Gudbjartur Kristofersson.
Sight description based on Wikipedia.
6

The Government House is a magnificent building in Reykjavík . It houses the Prime Minister's Office. The building was originally built as the first dungeon in Iceland, from the middle of the 18th century.

The first known source of speculation about the construction of a penitentiary in Iceland is in a letter from Henrik Ocksen, the district commissioner, to the district commissioner Joachim Henriksen Lafrenz, in the year 1733. Katrín Ingjaldsdóttir had been sentenced to death in Iceland but pardoned by the king, who commuted her sentence in life imprisonment. Such pardon was not uncommon. As there were no facilities in the country to keep prisoners for life, prisoners were sent to Denmark for imprisonment.

On March 20, 1759, the King of Denmark finally issued a ruling on the need to build a penitentiary in Iceland. Construction of the house began in 1761, and the convicts then served their sentences by working on its construction. The house was ready for use a decade later, in the winter of 1770–71. For the construction and operation of the penitentiary, a tax was levied on real estate and cowardice for detention, and was unpopular with the general public. The penitentiary was closed down in 1816.

In 1904, the first Icelandic ministry took office in the building, and later the cabinet, after which the building was named, in 1918. Since then, the offices of the Prime Minister and the Government of Iceland have been working in the building. The office of the President of Iceland was housed in the Government House from 1973-1996. The Icelandic national flag was first hoisted at this building.
Image Courtesy of Wikimedia and Guðmundur D. Haraldsson..
Sight description based on Wikipedia.
7

The Culture House has always been considered as one of the most attractive buildings in the country. Built in 1906 – 1908 house the National Library and National Archives of Iceland, the building is also a historic monument of Reykjavik. The building was designed by Danish architect Johannes Magdahl Nielsen and built by Icelandic craftsmen. The building's cornerstone was laid on September 23rd 1906 and it can be seen under the front steps.

There are numerous exhibitions in the Centre, including national treasures and artifacts from the time of the Vikings. The Centre also holds a large exhibition of Icelandic films. Many of the Centre's temporary exhibitions display original artifacts and photographs.

Tip:
Free with your National Museum ticket or the Reykjavik City Card; there are free lockers.

Hofdi is a Reykjavík house built in 1909 that has picturesque seascape views. Initially, it was built for the French consul Jean-Paul Brillouin in Iceland and was the exclusive residence of poet and businessman Einar Benediktsson (1864-1940) for many years.

It is best known as the location for the 1986 Reykjavík Summit meeting of presidents Ronald Reagan of the United States and Mikhail Gorbachev of the Union of Soviet Socialist Republics. That effectively was a step to the end of the Cold War. Even today, there are flags of these two countries on display.

The city of Reykjavík purchased the house in 1958, restored it to its former glory. Since that time the building was used for formal receptions and festive occasions by the city government. Many celebrities and rulers of different countries visited, lived or worked here. There is a sculpture in front of the house that represents the first Norwegian settler in Reykjavik.
Image Courtesy of Flickr and Peter.
Sight description based on Wikipedia.