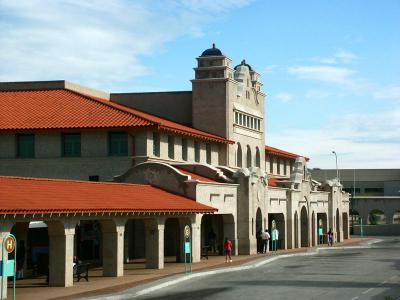 The Santa Fe Depot was a historic railroad station in Albuquerque which burned down in 1993. It was originally built by the Atchison, Topeka and Santa Fe Railway in 1902 along with the neighboring Alvarado Hotel. After the hotel was razed in 1970, the depot remained in use by ATSF and then Amtrak passenger trains. The building was listed on the New Mexico State Register of Cultural Properties in 1981 and was designated an Albuquerque Historic Landmark.

The Santa Fe Depot was built in 1902, replacing an earlier two-story wooden building. It was part of a larger complex that also included the Alvarado Hotel, an "Indian Building" where tourists could buy southwestern curios, and various outbuildings. The depot and hotel were designed by Charles Frederick Whittlesey and built by Anson & Holman at a total cost of about $80,000.

During the early 20th century, notable people frequently passed through the station, and crowds would gather when word was received that celebrities like Amelia Earhart or Albert Einstein would be arriving.

In 1970, amid declining train traffic, the Santa Fe Railway closed and demolished the Alvarado Hotel. The depot remained in use, and was designated an Albuquerque Historic Landmark, which was intended to protect it from meeting the same fate. However, it was destroyed by a fire on January 4, 1993. In 2006 the depot was replaced by a new Amtrak and Greyhound terminal on the same site which is part of the Alvarado Transportation Center multi-modal transit facility. The replacement station features a similar design to the original, with a tiled roof, arcade, and tower.
Image by Camerafiend on Wikimedia under Creative Commons License.
Sight description based on wikipedia