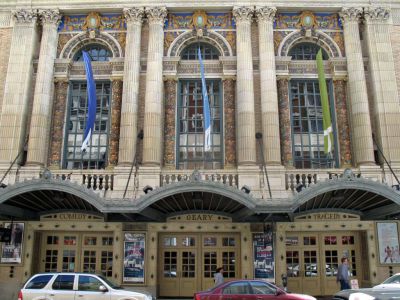 The American Conservatory Theater (ACT) is a major nonprofit theater company in San Francisco that offers the public both classical and contemporary theater productions.

ACT was founded in 1965 in Pittsburgh, Pennsylvania, by theater and opera director William Ball in conjunction with the Pittsburgh Playhouse and Carnegie Mellon University. Ball relocated the company to San Francisco after being invited by philanthropists and officials from that city to do so. The building houses ACT today was built in 1910 in the Classical Revival and Late Victorian styles, it was previously known as the Columbia Theater. The theater was listed on the National Register of Historic Places and was designated an official San Francisco Landmark in 1976.

ACT is a wonderful historic theater and an icon of culture in San Francisco.
Image by Sanfranman59 on Wikimedia under Creative Commons License.
Sight description based on wikipedia