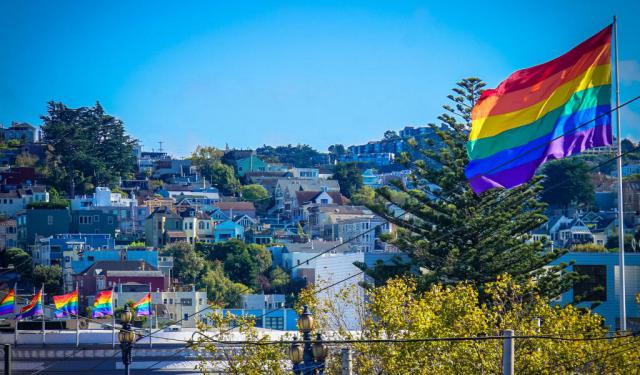 It is well known that San Francisco is the place where gay and lesbian culture flourished. Castro District, where LGBT flag is flying high, houses many of the city's gay-owned businesses and households – and is where the LGBT culture is considered a distinct part of local identity. This self guided tour leads you to the best known landmarks and most visited LGBT attractions in the Castro District.
Image Courtesy of Flickr and Ted Eytan.
How it works: Download the app "GPSmyCity: Walks in 1K+ Cities" from iTunes App Store or Google Play to your mobile phone or tablet. The app turns your mobile device into a personal tour guide and its built-in GPS navigation functions guide you from one tour stop to next. The app works offline, so no data plan is needed when traveling abroad.

One of the many places that one does not want to miss out on in San Francisco is the Castro Theater.

Whether you are a movie buff or not, the Castro Theater is a must-visit site in San Francisco. This one-of-a-kind theater is a perfect blend of vintage and modern times. The movie palace is filled with antiquities that can transport you to yesteryear but at the same time fixate your attention on watching a movie for this is one place where the audience is given the perfect movie experience with the latest speakers and sound systems and top-notch picture quality.

The building of the Castro Theater is one of San Francisco’s Top 100 Historical Landmarks. Built in 1922, the Castro Theater was designed by Timothy L. Pflueger and was started by the Nasser Brothers who are still its proud owners. Among other things, the Castro Theater is also known for its lavish, luxurious and ornate interiors, something quite alien to present day theaters. The estimated cost of constructing the theater in 1922 was $300,000. The theater can seat 1407 people at a time. People from all walks of life come especially to the Castro Theater to enjoy the movie experience. Sing along, yell, shout out with the crowd and get involved in the movie because that is how it is done at the Castro Theater.

Why You Should Visit:
It really brings back the feel of watching movies during the silent era; however, the best part is the Art Deco design/feel of the theater.

Tip:
Come a little early to enjoy the beautiful setting (including ceiling) and the fabulous live-playing organist who disappears into the ground with the curtain's rise!


Image Courtesy of Flickr and Allie_Caulfield.
Sight description based on Wikipedia.
2

The Pink Triangle Park is a triangular shaped mini-park located in the Castro District of San Francisco. The park is less than 4,000 square feet and faces Market Street with 17th Street to its back. The park sits directly above the Castro Street Station of Muni Metro, across from Harvey Milk Plaza. It is the first permanent, free-standing memorial in America dedicated to the thousands of persecuted homosexuals in Nazi Germany during the Holocaust of World War II.

Fifteen triangular granite "pylons", or columns, are dedicated to the tens of thousands of homosexual men that were killed during Hitler's Nazi regime and beyond. In the center of the park is a loose rock-filled triangle, that includes rose crystals. Visitors are encouraged to take a crystal as part of the memorial experience. The triangle theme recalls the Nazis forcing homosexual men to wear pink triangles sewn to their clothes as an identifier and badge of shame. The Pink Triangle Park was dedicated on the United Nations Human Rights Day, December 10, 2001 by the Eureka Valley Promotion Association. According to the non-profit that maintains the space, the Pink Triangle Park serves as "a physical reminder of how the persecution of any individual or single group of people damages all humanity." The Castro serves as a LGBT neighborhood for the San Francisco and Bay Areas communities, as well as a tourist destination for its part in modern LGBT history.
Image Courtesy of Wikimedia and Ryan Gessner.
Sight description based on Wikipedia.
3

Referred to as San Francisco's "queer Smithsonian," the GLBT History Museum is one of approximately 30 GLBT archives in the United States and is among the handful of such organizations to benefit from a paid staff and to function as a full-fledged center for exhibitions, programming, research, and production.

It is a small museum that offers wonderful insights into special moments in Castro District. If you are interested in the history of GLBT movements in San Francisco, the museum should be a must-see place on your itinerary.
Image Courtesy of Wikimedia and GKoskovich.
Sight description based on Wikipedia.
4

Castro Camera was a camera store in the Castro District of San Francisco, operated by Harvey Milk from 1972 until his assassination in 1978. During the 1970s the store became the center of the neighborhood's growing gay community, as well as campaign headquarters for Milk's various campaigns for elected office.

Milk, an avid amateur photographer, was disappointed over a developer ruining a roll of film. With his then-partner, Scott Smith, Milk opened the store in 1972, using the last $1,000 of their savings. The store soon became a focus of the growing influx of young gay people, who were coming from across the US to Castro District, where their sexual orientation was accepted.

Beyond selling cameras and film, Milk turned the store into a social center, and a refuge for new arrivals. He also made it an official polling station for San Francisco elections. Because he was so well known for his civic involvement promoting gay businesses and gay consumers, Milk soon became known unofficially as the "Mayor of Castro Street".

The location at 575 Castro Street, a Human Rights Campaign Store as of 2011, was recreated as a set for Milk, the biopic of Milk's life. The sparse set, carefully built to original detail including an old red couch and barber's chair, drew the attention of many local residents who remembered the original. The modern-day shop owner and film crew also described seeing a ghost at the store, whom they assumed to be Milk.

A metal plaque set into the sidewalk in front of the store memorializes Milk, and the location has been used as the stepping-off point for an annual memorial march on the date of his death.
Image Courtesy of Wikimedia and Zboralski.
Sight description based on Wikipedia.
5

Mission Dolores Park commonly called Dolores Park is a city park located in the neighborhood of Mission Dolores, at the western edge of the Mission District. Dolores Park has been the neighborhood center for cultural, political and sports activities since the 1960s. It has hosted political rallies, festivals, Aztec ceremonial dances, Cinco de Mayo celebrations, and San Francisco Mime Troupe performances. It is also the starting place for the annual San Francisco Dyke March and the Trans March, both are annual marches for LGBT people.

Dolores Park offers several features including many tennis courts, a basketball court, a multi-purpose court, a soccer field, a pissoir, a children's playground, and a dog play area. The southern half of the park is also notable for its views of the Mission district, downtown, the San Francisco Bay and the East Bay. The park is a popular place for relaxing and enjoying a nice view of the San Francisco downtown and the San Francisco Bay.
Image Courtesy of Flickr and Loose Charm Productions.
Sight description based on Wikipedia.