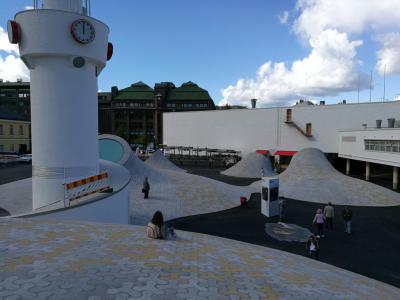 Amos Rex stems from The Amos Anderson Art Museum which was established in 1965 and named after publisher and arts patron Amos Anderson. It specializes in modern Finnish art, spanning the 20th-21st centuries.

In 2013, the AAAM announced plans to build a subterranean annex under Lasipalatsi plaza, near its main location on Yrjönkatu. The annex was also to use the above-ground facilities in the Lasipalatsi building. The design was done by JKMM Architects, whose other works included the Turku Main Library and the Finnish pavilion at the 2010 Shanghai World Expo.

The new project symbolized an intriguing link between the past (albeit not so distant) and the present. Placed beneath Lasipalatsi square, the ultra-modern edifice, complete with its entrances and foyers, administrative offices and the Bio Rex cinema, meant to bring out the new century's sculptural form onto the site just as resolutely as the square itself did back in the 1930s.

The construction started in January 2016 and the new complex opened its doors in August 2018. It turned out to be quite roomy thanks to the vaulted domes dominating the complex and making it pillar-free on the inside. Cast in reinforced concrete, right on the site, their shape is structurally optimal and crucially important for adding flexibility to the space. The skylights intentionally open onto recognizable details of the surroundings, such as the chimney in the middle of the square, and thus attain the desired connection between the subterranean complex and the city above.

The museum rapidly reached international popularity, having attracted in the course of just few weeks since its opening more than 10,000 visitors. There are in total over 7,000 exhibits here, including the works of such famous Finnish artists as Magnus Enckell and Felix Nylund, as well as Carlstedt, Finch, and Salokivi, among others.
Image by Sino Yu on Wikimedia under Creative Commons License.
Sight description based on wikipedia