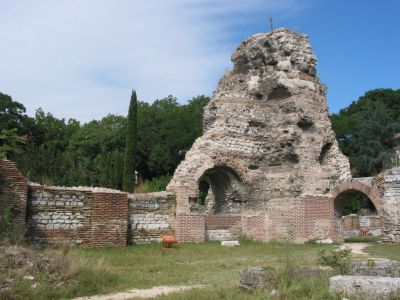 The Roman city of Odessus, formerly of the Moesia province, once covered 47 hectares of the present-day downtown Varna. It had prominent public baths, known as Thermae, which were erected in the late 2nd Century AD and are now the largest remnants of Roman culture in Bulgaria. With an original size of 100m wide, 70m long, and 25m high, the baths were the fourth-largest known Roman baths in all of Europe. Major athletic games were held there every five years, possibly attended by Gordian III in 238 AD. Odessus was also an early Christian center, as evidenced by ruins of ten early basilicas.
Image Courtesy of Wikimedia and Extrawurst.
Sight description based on Wikipedia.