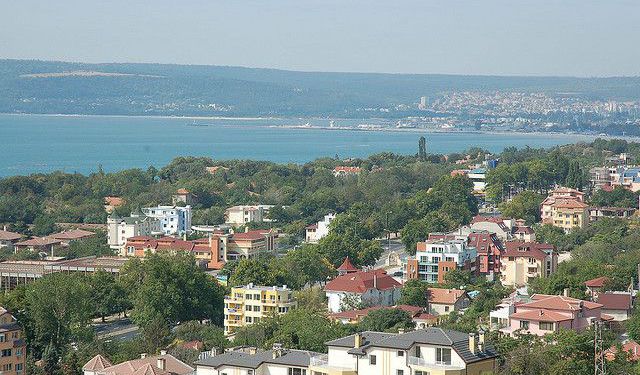 The biggest holiday city in Bulgaria, Varna is packed with cafes, bars, art galleries and many other interesting places. This Black Sea port has clean beaches with turquoise waters, and boasts a truly picturesque landscape. Check out this Orientation Walk to have your trip to Varna off to a good start.
Image Courtesy of Flickr and vladislav.bezrukov.
How it works: Download the app "GPSmyCity: Walks in 1K+ Cities" from iTunes App Store or Google Play to your mobile phone or tablet. The app turns your mobile device into a personal tour guide and its built-in GPS navigation functions guide you from one tour stop to next. The app works offline, so no data plan is needed when traveling abroad.

1) Dormition of the Theotokos Cathedral (must see)

Image Courtesy of Wikimedia and Harrieta171.
Sight description based on Wikipedia.
2

Nezavisimost Square is the city's central square, and is home to the Opera House, the Varna Cathedral and the Round Tower. There are also a lot of sidewalk cafes here, plus the City Garden, which is surrounded by curious and historic buildings. You can also find a beautiful round fountain which is the largest in the city and seen as a symbol of Varna.
Image Courtesy of Flickr and www.worldtravellers.dk // Nicolai Bangsgaard.
3

The Stoyan Bachvarov Dramatic Theatre is a theatre founded in 1921 as the Municipal Professional Theatre. It occupies a historic building in the centre of the city designed by Nikola Lazarov and built between 26 March 1912 and 5 June 1932. The building was finished by the architects Dabko Dabkov and Jelyazko Bogdanov. It is named after the prominent theatre actor Stoyan Bachvarov.

The theatre has a main auditorium, a branch stage and a small auditorium.
Image Courtesy of Wikimedia and Martyr.
Sight description based on Wikipedia.
4

4) Museum of Ethnography (must see)

The Museum of Ethnography is dedicated to preserving the old customs and traditions of Bulgaria. Here you can find out a lot about the life in Varna over the last two centuries, with traditional costumes, gowns, jewelry and arts and crafts on display. Founded in 1974, the museum itself is housed in a typically Bulgarian home with traditional decor.
Image Courtesy of Wikimedia and Ilonamay.
5

The Roman city of Odessus, formerly of the Moesia province, once covered 47 hectares of the present-day downtown Varna. It had prominent public baths, known as Thermae, which were erected in the late 2nd Century AD and are now the largest remnants of Roman culture in Bulgaria. With an original size of 100m wide, 70m long, and 25m high, the baths were the fourth-largest known Roman baths in all of Europe. Major athletic games were held there every five years, possibly attended by Gordian III in 238 AD. Odessus was also an early Christian center, as evidenced by ruins of ten early basilicas.
Image Courtesy of Wikimedia and Extrawurst.
Sight description based on Wikipedia.
6

This church was built in 1838 on the same site as a previous structure of the same name, which was destroyed by fire in 1836. Many beautiful icons are stored here, and the church itself is very ornately decorated. There are beautiful images of flowers, animals, tree leaves and crosses adorning the church walls.
Image Courtesy of Wikimedia and Svilen Enev.
7

Established in 1969, this history museum is housed in a building that has had several lives. Originally the Belgian consulate, the same building was later a hotel and then a prison before the museum opened on the site. Three exhibitions are spread across the three floors with a total display space of 600 square meters. Here you can learn all about Varna's economic, industrial, cultural, educational and touristic development from 1878 to 1939.
Image Courtesy of Wikimedia and Powerfox.
8

Varna's beach is very clean and beautiful. Surrounding the beach itself you'll find lots of bars, disco-clubs, restaurants and many other places for a good time out. The most fun activity of all, however, is to simply walk along the beach enjoying the beautiful turquoise waters and taking some great photos.
Image Courtesy of Wikimedia and Harrieta171.
9

Established in 1885, the Naval museum is located in the Sea Garden not far from the railway station. This large museum has more than 350 square meters of exhibition space, featuring fortifications on the Black Sea and the Danube coast dating back to medieval period, the Russian-Turkish wars of the 17th-19th centuries, and the Emancipation War of 1877/78. Outside the museum you can find a Drazki ship, the most renowned vessel of the national navy.
Image Courtesy of Wikimedia and Nikola Gruev.
10

10) The Aquarium and the Black Sea Museum (must see)

Open since 1912, the Aquarium and the Black Sea Museum have a facade that combines bas-relief images of some of the most common species found in the Black Sea. The Aquarium has a fascinating collection of fresh-water and sea creatures; some of the flora and fauna exhibits are truly unique.
Image Courtesy of Wikimedia and Svilen Enev.
11

The Planetarium of Varna bears the name of famous astronomer Nicolaus Copernicus. Founded in 1963, it's the largest planetarium in Bulgaria. Lots of visitors come here to observe the Sun, Moon and stars with the facility's special projectors.
Image Courtesy of Wikimedia and Nikola Gruev.
12

The national astronomical observatory and planetarium of Varna are the biggest and the most modern complex on the Balkans and so one of the most famous attractions in the city. Located just beside the entry of the Sea Garden the planetarium is providing it's visitors with spectacular show by the ZKP(Zeiss Kleinplanetarium)projector showing 5500 stars on a 10.5 meter hemispherical dome. Part of the compelx is also the tower with Foucault pendulum with high of the suspension of 14.40 meters.
Image Courtesy of Wikimedia and Ivan2varna.
13

Anton Novak Square is a wonderful place for enjoying the sea view and watching open-air concerts. It was named after a famous Czech park designer. There are plenty of cafes and bars in the park, as well as great shops on the nearby Slivnitsa Boulevard. Inside the park, near the square front, is a famous Sea Garden.
Image Courtesy of Wikimedia and Svilen Enev.
14

The Sea Garden of Varna is where both visitors of the city and locals are going if willing to enjoy some recreation or a peaceful walk alongside the sea. Within the park are located also the Zoo and the Terrarium and the Natural Sciences museum. A pleasant walk can be interrupted to go the nearby swimming pools, open-air theater, tennis courts or a even a complex for children with water wheels, archery and slides. Alongside the park small cafes and restaurants are offering seafood specialties.
Image Courtesy of Wikimedia and Martyr.