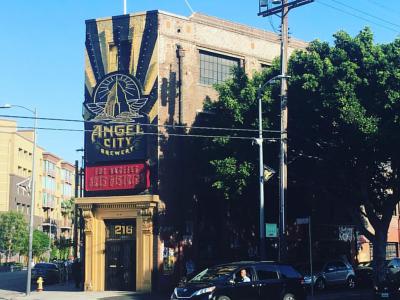 In a city known more for its glitz than its grit, Angel City Brewery is proud to rough things up a bit and work beneath the shiny surface. Founded in 1997, the brewery was off to a modest start but quickly gained recognition on L.A.'s craft beer scene. In 2010 it moved to the present location, the historic John A. Roebling Building in the heart of the ambitious and diverse Arts District. And its beer proved to be a good match for the area, eventually becoming an integral part of its revitalization.

As of January 2012, Angel City underwent massive renovations, including the addition of a new mustache bar. In February 2013, the Brewery and Public House opened its doors for the first time offering an ever-rotating selection of Angel City beer on tap, including a number of beers exclusively available here and nowhere else. Their massive taproom, laden with tons of communal tables and a small on-site retail store, is an ideal place to gather with friends. Outside food is welcome, and there are a number of great locations in the neighborhood that offer take-out. In addition to the neighborhood cuisine, there is a front patio – a hot spot for food trucks offering delicious bites for customers to pair with their beer.

Apart from the pints and flights of craft beers, this open-air public house is also known for the street art which adorns the building. Here, alongside Miller’s angel wings, you can see antigirl’s Heart of Los Angeles and a haunting portrait from JR’s The Wrinkles of the City series.

Open seven days a week for tours and tastings, plus a full roster of weekly events, Angel City is one of the firm favorites among drinking spots in L.A., with the hours going late into the night. Just make sure to get here early, as weekend lines are no joke.
Image by Achim Hepp on Flickr under Creative Commons License.