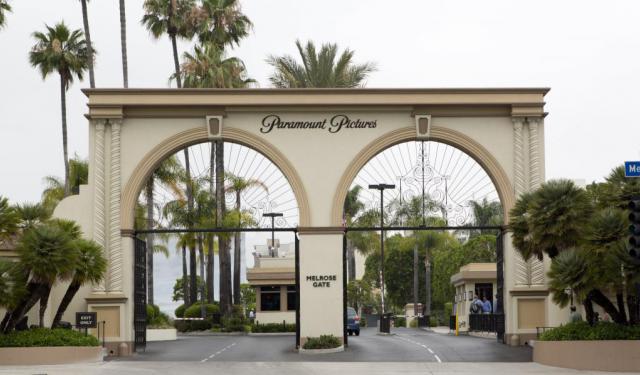 Los Angeles movie studios are truly star factories, where many great movies are filmed. There are many movie studios in Los Angeles. Some of them, such as Paramount Pictures and Dreamworks, are very famous, while others, like Raleigh and Ren-Mar are lesser known, but they all had their moments in the film history. Check out these wonderful movie studios in Los Angeles in this self-guided tour.
Image Courtesy of Wikimedia and Carol M. Highsmith.
How it works: Download the app "GPSmyCity: Walks in 1K+ Cities" from iTunes App Store or Google Play to your mobile phone or tablet. The app turns your mobile device into a personal tour guide and its built-in GPS navigation functions guide you from one tour stop to next. The app works offline, so no data plan is needed when traveling abroad.

Raleigh Studios is perhaps not as famous as Paramount Pictures or Warner Brothers, but it is one of the oldest studios in Los Angeles and one of the longest continually-operating studios in the world. Opened in 1915, the studio has had several names, including Clune Studios, California Studio and Producers Studios. Some of the biggest names in Hollywood history, including Charlie Chaplin, Douglas Fairbanks, and Mary Pickford, had once worked in the studio. Many Oscar-winning films were filmed here, among them are "What Ever Happened to Baby Jane," "In the Heat of the Night" and "The Best Years of Our Lives.”
Image Courtesy of Flickr and JF10.
2

Paramount Pictures was established in 1913. It is the fifth oldest surviving film studio in the world and the second oldest in the United States. In 1926 the studio moved to its current location. Paramount Pictures is the one of biggest and the most successful studios in the world. Paramount's stars include such big celebrities as Marlene Dietrich, Clara Bow, Gary Cooper, and countless others. Paramount has produced many top grossing movies in the history, among them Titanic, Forrest Gump, Transformers: Revenge of the Fallen, Iron Man, Star Trek, Raiders of the Lost Ark, and many more.

Paramount Pictures offers guided tours so visitors can see how movies are made. Paramount studio tours are informative, interesting and entertaining for visitors and are often the highlight of a LA trip.

Why You Should Visit:
To see behind the scenes of how film and TV shows are made. Tours are conducted in small groups of about 20-25 people. You go through the back lot and some of the sound stages. Good explanation by knowledgeable tour guides. Interesting interactive museum to end the tour.

Red Studios Hollywood, formerly Desilu Cahuenga Studio and Ren-Mar Studios, is a rental studio in Hollywood. It was first built in 1915 as Back Lot #3 of Metro Pictures.

In 1953, after filming the first two seasons of the I Love Lucy TV series at General Service Studios, Lucille Ball and Desi Arnaz were looking for a larger studio. They looked at the lot (known at the time as Motion Picture Center) and signed a ten-year lease on the property. The studio, after several name and ownership change over the years, eventually become "Red Studios Hollywood".

I Love Lucy (seasons 3–6, 1953–1957), The Lucy-Desi Comedy Hour (1957–1960), The Lucy Show (1962-1968), The Dick Van Dyke Show (1961–1966),[4] My World and Welcome to It, Make Room for Daddy, Hogan's Heroes, The Andy Griffith Show, The Jack Benny Program, That Girl, Seinfeld, The Golden Girls, Empty Nest, NewsRadio, Ally McBeal, and Lizzie McGuire are among the television series that have been filmed entirely or partially at Red Studios Hollywood. In addition, music videos are often filmed at the studio, including those of Madonna, INXS, Michael Jackson, Ozzy Osbourne, Hilary Duff and Britney Spears. In 1991, the Richard Simmons exercise tape, "Sweatin' to the Oldies 3" was taped here.
Image Courtesy of Flickr and mark sebastian.
Sight description based on Wikipedia.
4

Sunset Las Palmas Studios, previously known as Hollywood Center Studios, is an independent production lot providing stages and related services to television, movie and commercial production companies. Founded in 1919 by John Jasper, a former associate of Charlie Chaplin, the lot is one of the oldest production facilities in Hollywood and has played host to many notable productions, including such television shows as The Burns and Allen Show, I Love Lucy, The Addams Family, seasons 2-10 of Jeopardy! (1985-1994), The Rockford Files, The Keenen Ivory Wayans Show, MADtv, and The Suite Life on Deck, RuPaul's Drag Race and Raven's Home, as well as such movie productions as When Harry Met Sally... and The Player.

Sunset Las Palmas Studios continues to provide stage facilities for many television productions, including shows produced by Disney, NBC, Comedy Central and MTV. The lot features 12 sound stages, ranging in size from 4,400 square feet to 19,000 square feet, several of which are able to accommodate live audiences, as well as a virtual set stage for webcasts.
Image Courtesy of Wikimedia and Kgayhart.
Sight description based on Wikipedia.
5

When you pass the Jim Henson Studios (former Charlie Chaplin Studios) on La Brea Avenue, you would be excused if you thought that you were on the film-set of an English village.

Charlie Chaplin bought the vast tract of land that had once been an orange grove, in 1917, and built there his studios. The screening rooms, offices and film laboratory were housed in charming English-style cottages. The studios themselves included the back lot with its outdoor sets, twin open-air stages, carpenter’s shed, garages, film vault and dressing rooms.

On the north end of the land Charlie Chaplin built a lovely house which he intended for his own use, although he never lived there in the end and rented it out to various friends. The house had adjoining stables, a swimming pool and tennis courts. He eventually sold the house and surrounding land, and the buildings were demolished in 1942 to give way to a new shopping centre.

Before selling the studios in 1953, Charlie Chaplin turned some of his best films here, including “The Kid”, “The Gold Rush”, “The Great Dictator” and “Modern Times”. Sadly, America was soon to be deprived of its beloved “little Tramp with a Heart of Gold”: during the dark years of the McCarthy Era many Hollywood stars suffered greatly for their mild communist leanings. Charlie Chaplin was considered to be a “Pinko” for his left wing views and when he went to England in 1952 for a short holiday, Hoover, the director of the FBI, had his right to re-enter the United States revoked, and Chaplin settled in Switzerland.

He sold the studios in 1953 to a television company. In 1959, Red Skelton bought the studios and sold them to CBS in 1962. Since 2000 the studios have been the home of the Jim Henson Company and his delightful Muppets.

Charlie Chaplin returned once to the United States. In 1972, he came back with his wife to receive an Honorary Oscar, but he refused to visit his old studios, saying the memory was “too painful”.
Image Courtesy of Wikimedia and Cbl62.