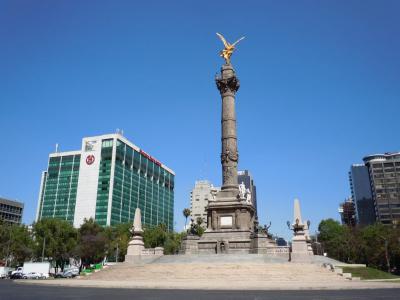 The focal point for both celebrations and protests, the Angel of Independence serves as a monument of the 100th year of Mexican Independence and as a memorial for its heroes. The statue is located in a roundabout over the Paseo Reforma in Mexico City. The official name of the statue is the Columna de la Independencia.

President Porfirio Diaz commissioned the sculpture in 1902. Italian sculptor Aciati made the figures that adorned the structure and architect Antonio Rivas Mercado designed the monument. The first purpose of the Angel was to commemorate the 100th year of Mexico's Independence. In 1925, the monument was also made a mausoleum for heroes. Miguel Hidalgo, the father of the nation, Juan Aldama and Nicolas Bravo are interred beneath the foundations. The angel fell from the pillar in the earthquake of 1957 but was restored to its former glory by sculptor Jose Fernandez Urbina. An eternal flame to honor the interred heroes was added in 1929.

The column is made of steel surrounded by quarried stone. The 36-meter high column is covered with carved garlands, palms and rings. The carved figures contain names of the important personalities who helped to shape Mexico's independence. The angel on top is 6.7 meters high and is made of bronze coated with 24-carat gold. A hidden staircase within the column takes visitors to the Corinthian style Capital and the angel is lit beautifully for the benefit of those who drive by at night.

Tip:
Tours to the Angel normally include only a walk around inside the statue's base and its mini-museum; however, with advance notice and a special permit, groups can ascend the statue's inner staircase and go all the way to the top for a glimpse at the city below – a breathtaking site!
Image by Sagitario on Wikimedia under Creative Commons License.
Sight description based on wikipedia

Mexico City is one of the most dazzling cultural sites in the world, having more museums than any other city. Mexico City also has a rich history of artistic expressions. It was home to the Aztec civilization and the Spanish Empire both of which have left behind an impressive heritage and a unique culture.