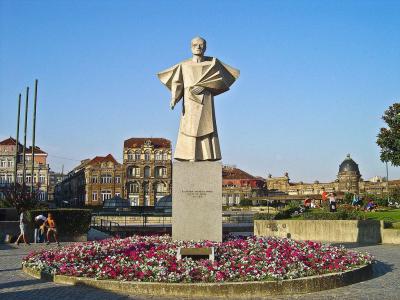 Another statue closely associated with Jardim da Cordoaria, standing right in front of the garden, is the one dedicated to António Ferreira Gomes (1906-1989).

Dom António Ferreira Gomes was a prominent Catholic bishop in Porto, from 1952 until 1982, and was much notable for his attention to the social misery of the Portuguese people, as well as for his criticism of the State's corporatism, much as for the demand for free expression of thought and political action.

The monument (Estátua António Ferreira Gomes) was created by the sculptor, Arlindo Rocha. Its location, next to the Clérigos Tower, has been purposefully chosen, so as to ensure that it does not get unnoticed.
Image Courtesy of Flickr and Vitor Oliveira.