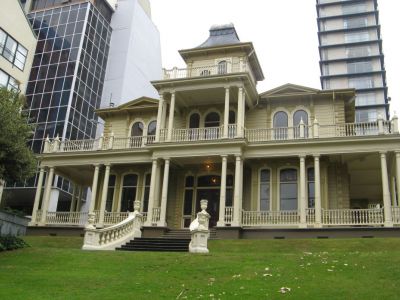 The building is classified as a "Category I" historic place by the New Zealand Historic Places Trust.

Features of the structure corresponded to the earlier tastes for Queen Anne and Second Empire styles, as seen in the heavy interior cornices, the original though lost upper iron detailing and the central tower. The structure itself is mainly of kauri and heart totara, lying on concrete foundations.

Until the leaving of the Hannah family from the residence, Antrim served as exactly as intended: a display of not only taste and wealth of a self-made man. The central location served to highlight this, while the original garden on the sloping site in front of the house helped to enhance the features and the property itself. Inside, visitors found gas piping, electric lights, and the modern convenience of a piped bathroom. Paired with pressed-zinc ceilings, stained glass lead lighting, and turned features, Antrim House epitomised what was considered both modern and high taste.

With the Hannah family departing the house in the 1930s, its central location and size worked against it. The house had fallen from fashion, and subsequently became a boarding house; a fate that many grand houses in urban areas have shared. During this time, the building suffered its largest ignominy; the fire of 1940. Features that had survived the departure of the Hannahs were now lost to this, and in reconstruction much of its decorative originality was not replaced: two examples are the asymmetry of the originally symmetrical windows on top of the tower, and the oddly placed Art Deco styled arch above the formal stair.
Image Courtesy of Wikimedia and Lanma726.
Sight description based on Wikipedia.