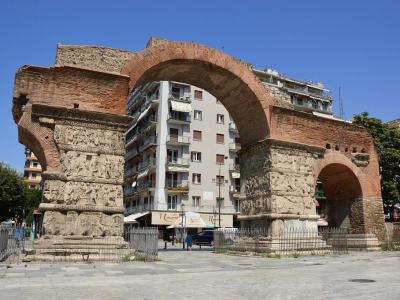 Arch of Galerius, Thessaloniki (must see)

The Arch of Galerius is early 4th-century monuments in the city of Thessalonik.

The arch was built in 298 to 299 CE and dedicated in 303 CE to celebrate the victory of the tetrarch Galerius over the Sassanid Persians and capture of their capital Ctesiphon in 298. The structure was an octopylon (eight-pillared gateway) forming a triple arch that was built of a rubble masonry core faced first with brick and then with marble panels with sculptural relief. The central arched opening was 9.7 m wide and 12.5 m high, and the secondary openings on other side were 4.8 m wide and 6.5 m high.

Only the northwestern three of the eight pillars and parts of the masonry cores of the arches above survive.

Extensive consolidation with modern brick has been performed on the exposed masonry cores to protect the monument. The two pillars flanking the central arched passageway retain their sculpted marble slabs, which depict the wars of Galerius against the Persians in broadly panegyric terms.