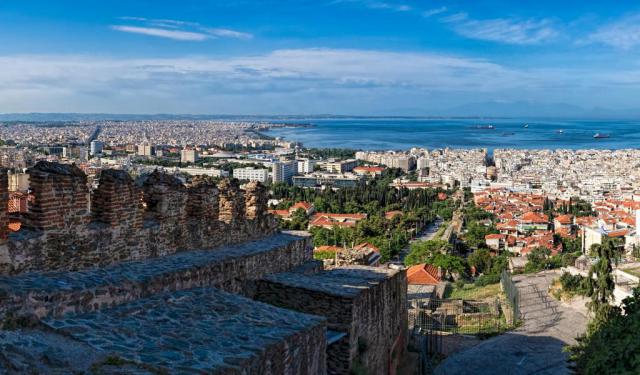 Image by Dan Lundberg on Flickr under Creative Commons License.

Upper Town (Ano Poli) Thessaloniki is the most ancient part of the city that is approximately 2300 years old. Here you may see the ancient Byzantine wall with its towers, ancient religious sites with Byzantine mosaics and frescoes, and other remnants of the city's great civilization. Take this tour to have a closer look of what's left.
How it works: Download the app "GPSmyCity: Walks in 1K+ Cities" from iTunes App Store or Google Play to your mobile phone or tablet. The app turns your mobile device into a personal tour guide and its built-in GPS navigation functions guide you from one tour stop to next. The app works offline, so no data plan is needed when traveling abroad.

The Heptapyrgion Fortress is an imposing ancient structure with a long history. The fortress is also known as Yedi Kule. While the name translates to "Fortress of Seven Towers," the fortress actually features ten towers that were built at different times.

The Ottomans conquered Thessaloniki in the 15th century and rebuilt the fortress. Under Ottoman rule, the fort served as the city's military governor's residence.

During the later 19th century, the fortress was converted into a prison. The prison held political prisoners during World War II. In 1989, the prison facilities were relocated.

The Ministry of Culture took over the Heptapyrgion Fortress and began restoration work. Visitors are welcome to explore the eerie fortress and enjoy the fabulous views.


Image by Marsyas on Wikimedia under Creative Commons License.
2

The Walls of Thessaloniki were part of the old city's fortifications. The walls were originally built during the fourth century and feature typical Roman masonry. The walls connect with the acropolis and the Heptapyrgion Fortress.

During the 15th century, the walls were reinforced and renovated to try and meet the Turkish threat. Historians believe that the White Tower and the Trigoniou Tower were built during this time.

The walls are up to 10.5 meters (34.4 feet) tall and four-and-a-half meters (14.7 feet) wide. Originally, the walls were about eight kilometers long. Today, about four kilometers of walls have been preserved.

The walls were decorated with symbols such as inscriptions, crosses, and suns. A cistern in the wall's southeast section provided the city's water supply.

Portara was the Thessaloniki old city's main gate. At Portara, you can see different layers of brickwork where the walls have been repaired over the centuries. Visitors can walk around the preserved walls for excellent views of the city.
Image by Berthold Werner on Wikimedia under Creative Commons License.
3

The Trigonion Tower is the Byzantine city wall's most famous tower. It is part of Thessaloniki's UNESCO World Heritage Site. It was built to reinforce an artillery tower after the Turkish occupation began in 1430. The tower's location was strategically important as this portion of the wall when Thessaloniki faced heavy attacks.

During Ottoman rule, the tower was also called Chain Tower or Belted Tower due to a relief in the central section that looks like a belt. It was used as an artillery tower and an armory. The tower is 22 meters (72.2 feet) tall and 24 meters (78.7 feet) in diameter.

The Trigonion Tower is also known as Thessaloniki's balcony. It provides an excellent view of the city's acropolis. In addition, visitors can enjoy a panoramic view of the old city and the Gulf of Thermaikos. On clear days, visitors can see Mount Olympus 150 kilometers away. Visitors and locals alike often gather here to watch the sunset.

Visitors can stop at a nearby cafe for refreshments before continuing their walk.
Image by Snowdog on Wikimedia under Creative Commons License.
4

Dorotheus and Markus Vlatadon founded the monastery in 1351. Historians believe the monastery was built on the same site that the Apostle Paul preached in AD 51. In 1351, Empress Anna Palaiologos retired to Thessalonica and gave the monastery its royal status.

Ottoman Turks began occupying the monastery in 1387. The main church was converted into a mosque, and the Turks plastered over the interior frescoes. Turkish troops billeted in the monastery during this time. When the Turks left in 1403, the monastery was returned to its original purpose. The Turks returned in 1430 but did not sequester the monastery again.

The monastery was renovated throughout the 20th century. The Patriarchal Institute for Patristic Studies operates in the monastery.

Several of the monastery's arches, semi-columns, and pediments are original. Most of the frescoes date to the 14th century. The monastery houses an extensive collection of Byzantine religious icons, scripts, codecs, patriarchal sigillum, and imperial golden seals.

The monastery is 120 meters (394 feet) above sea level and offers beautiful city and sea views.
Image by Stolbovsky on Wikimedia under Creative Commons License.
5

The Church of Hosios David was built in the 5th century. It was part of the Latomos Monastery during Byzantine times. The church was built in a cross pattern with square bays in the corners.

Many of the frescoes and decorations have been damaged by earthquakes and the plaster coverings used during Ottoman rule. However, many beautiful mosaics and frescoes remain. For example, the stunning Theophany mosaic features Christ holding a text, surrounded by Evangelists.

Murals from the 12th and 13th centuries depict the nativity, Christ's baptism, our lady of the passion, Christ's entry into Jerusalem, and many decorative panels.
Image by Mboesch on Wikimedia under Creative Commons License.
6

The bath's water came from a cistern, which was heated with a hearth. During the Byzantine era, men and women alternated using the baths. During Ottoman rule, men and women used separate areas.

The bath was neglected since it closed in 1940 and was damaged during the 1978 earthquakes. It has since had extensive restoration work and is now open to the public as a cultural space and museum.
Image by C messier on Wikimedia under Creative Commons License.
7

The Church of Saint Nicholas Orphanos was originally built in the early 14th century as part of a monastery.

Serbian king Stephen Uros II Milutin sponsored several churches in Thessaloniki and might have sponsored the Church of Saint Nicholas Orphanos. Milutin's patron saint, Saint George Gorgos, is depicted in a fresco in the church's main aisle. Another fresco features St. Clemens of Ohrid, who was often depicted in Serbian churches.

The Church of Saint Nicholas Orphanos avoided conversion during Ottoman rule. This is probably because the church is relatively small, humble, and out of the way.

The small, simple church originally had a wooded gabled roof. The exterior features brick and stone in irregular layers. A small walled garden provides a delightful place for contemplation.

The interior features the church's original marble templon. The church's most impressive feature is its original frescoes covering the walls. The frescoes show various narrative scenes showing Christ's life and miracles. The frescoes also feature scenes from the life of Saint Nicholas.
Image by Buchhändler on Wikimedia under Creative Commons License.
8

The house was built sometime before 1870. It is a three-floor house and features a courtyard. The courtyard has a pomegranate tree that Kemal's father planted.

The house, located next to the Turkish Consulate, was damaged by a 1955 bomb. The bombing was ordered by Turkish Prime Minister Adnan Menderes, who was sentenced to death.

The house was restored in 1981 and repainted its original pink color. The museum features original furniture.

The museum's walls feature several photographs from different periods of Kemal's life. This fascinating museum gives an interesting glimpse into the life of one of Turkey's most influential personalities.
Image by TheOnassis on Wikimedia under Creative Commons License.
9

The Alaca Imaret Mosque was built in the late 15th century. The city's governor Ishak Pasa sponsored its construction. As a result, the mosque is sometimes called the Ishak Pasa Mosque.

In addition to the mosque, the building housed a public charity kitchen, known as an imaret. It also housed a Medrese. The building is owned by the municipality of Thessaloniki and no longer functions as a mosque. It is used for exhibitions and cultural events.

The mosque features early Ottoman architecture with a reverse T plan. The large prayer hall has two large domes, and the portico has five smaller domes. Lead sheets originally covered all the domes.

The Alaca Imaret Mosque was the city's most impressive mosque. The interior featured murals as well as inscriptions from the Koran.

The mosque's minaret was destroyed after the Greeks re-captured Thessaloniki in 1912.
Image by Knop92 on Wikimedia under Creative Commons License.
10

The Church of Prophet Elijah was built in the 14th century. It is a UNESCO World Heritage Site.

The church's architecture is unique for Thessaloniki. The church's floor plan is laid out in a cross-in-square style. The exterior features alternating layers of brick and white ashlar. The east side of the church has intricate decorative brickwork. The architecture is similar to Constantinopolitan designs rather than typical Thessaloniki designs.

The church was designed to let in natural light. The windows are specifically oriented to light the church from sunrise to sunset and provide beautiful illumination for the church's wall paintings.

The interior features several preserved wall paintings dating to the 14th century. Scenes show Christ's childhood and miracles. Other scenes depict Saint Anne and the Virgin and the Christ and the Virgin.

During Ottoman rule, the church was converted to a mosque known as Sarayli Mosque. The church underwent restoration work in the 1950s.
Image by C messier on Wikimedia under Creative Commons License.
11

The Church of Saint Catherine is a late Byzantine church built in the 14th century. This beautiful church is a UNESCO World Heritage Site.

The Church of Saint Catherine has a tetrastyle cross-in-square floorplan. The church features an ascending series of roofs. It features a seven-sided central dome with four small cupolas. The elegant church has blind arcades, half-columns, and decorative brickwork. A marble cornice divides the church vertically.

Like many of Thessaloniki's churches, the Church of Saint Catherine was converted into a mosque during Ottoman rule. The mosque was known as Yakup Pasha Mosque. Unfortunately, historians have not uncovered the church's original name before Ottoman rule.

The church has fragments of original wall paintings from the 14th century. The paintings feature vibrant colors and are similar to the Church of Hagios Nikolaos Orphanos. The wall paintings depict the Communion of the Apostles, prophets, angels, and the Miracles of Christ.
Image by C messier on Wikimedia under Creative Commons License.