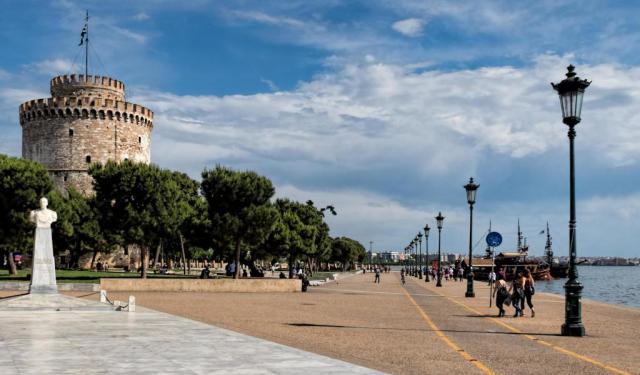 The Mediterranean has always been an integral part of Thessaloniki’s appeal. The city's orientation toward the sea is largely due to the vision of Ernest Hébrard, the French urban planner and architect, who redesigned the downtown area after the devastating fire of 1917.

To really get the taste of Thessaloniki you need to visit not just its historical landmarks, but also those spots that keep adding new tales. Heading east from the Port you will find plenty of both worth checking out.

While the architecturally indifferent buildings near the Port mostly house shipping and law offices, the view changes dramatically from Aristotelous Square onwards, segueing into luxurious apartment blocks and some of the most expensive real estate in the city. Nikis Avenue, complete with Palia Paralia (Old Waterfront), is one such place.

Walking for a few minutes more will bring you to the White Tower, the city’s most emblematic landmark and museum, and the point where the Nea Paralia (New Waterfront) begins – an ambitious renovation designed by architects Prodromos Nikiforidis and Bernard Cuomo. Being 3,5km in length, the New Waterfront offers a pleasant alternative for a walk with children.

Along the beach, you will find a number of theme parks. One of them is dedicated to Alexander the Great, the ancient military commander and king of the Macedonians whose mounted statue, featuring his favorite horse Bucephalus, is found right here.

To explore the lovely waterfront area of Thessaloniki at your own pace and in your good time, take this self-guided walking tour and enjoy yourself!
Image Courtesy of Flickr and Dan Lundberg.
How it works: Download the app "GPSmyCity: Walks in 1K+ Cities" from iTunes App Store or Google Play to your mobile phone or tablet. The app turns your mobile device into a personal tour guide and its built-in GPS navigation functions guide you from one tour stop to next. The app works offline, so no data plan is needed when traveling abroad.

Throughout its history, Thessaloniki's seaport has been a vital part of its economy. The Port of Thessaloniki serves as a gateway to the Balkans and southeast Europe. It is one of the Eastern Mediterranean's largest ports.

This busy port handles shipping containers and cargo. The port connects to the national and international rail networks for easy cargo distribution.

The port also has one of the Aegean Sea's largest passenger terminals. The passenger terminal is located in a historical building. It was originally built in 1912 as the customs house. Thessaloniki is a popular cruise destination, and the port is an easy distance from Thessaloniki's main attractions.

Image Courtesy of Wikimedia and Argyrios.Dagkilas.
2

It was August, 1917. Greece had taken the Allied side in the Great War and the city of Thessaloniki was teeming with British and French troops and refugees from Turkey. In a small house of refugees at OLympiados 3, an ember from the kitchen fire set some straw alight. The fire spread, driven by the wind, and Thessaloniki burned for two days.

French architect Ernest Hebrard was in town. Prime Minister Eleftherios Venizelos forbade any reconstruction without a modern plan and he commissioned Hebrard for the job.

Hebrard came up with a city-wide plan of large squares and broad avenues and buildings with imposing facades derived from Byzantine elements. Among the large squares was Alexander the Great Square, now called Aristotelous Square.

A monumental axis stretches from sea-facing Aristotelous Square to Dikastirion Square and the Roman Forum. Looking uphill from the square one can see the ancient Byzantine walls of the city. A statue of Alexander the Great rides the waterfront esplanade of the square. Eleftherios Venizelos raises his right hand in benediction.

Aristotle relaxes in his chiton and sandals. The big toe of his left foot shines from rubbings of students hoping his wisdom will rub off. The square is a venue for rallies and demonstrations and cultural events, including annual Christmas and carnival celebrations.

The square is also home to several landmark buildings, such as the Electra Palace Hotel. This iconic hotel features stunning architecture and lavish interior decorations. In addition, visitors can check out the Orizontes Roof Garden and enjoy a spectacular waterfront view while dining or enjoying a cocktail.

The Olympion Theatre Cinema is another popular attraction. The neoclassical Olympion hosts the annual International Film Festival of Thessalonica. This film festival began in 1960 and facilities film viewers to discuss the chosen movies with film directors.
Image Courtesy of Flickr and grolli77.
3

Leoforos Nikis ("Victory Avenue") is the most famous, busiest, photographed, painted and by far the most expensive thoroughfare to go shopping in the heart of Thessaloniki. The three-line central street, whose pedestrian part is known as Old Waterfront, stretches from Eleftherias Square and the Port, crossing the entire coastal front, past Aristotelous Square towards the White Tower and Alexander the Great Avenue.

Prestigious as it is, Victory/Nikis Avenue is a home to the most luxurious and sought-after residential and commercial properties in the city, as well as some of the most expensive addresses in Southeast Europe. The consulates of Switzerland, Spain, the Czech Republic, Cyprus and the Philippines are found here too.

Highly valued commercially and often associated with entertainment, Nikis Avenue accommodates the city's best nightclubs, dozens of bars and restaurants, not to mention numerous retail options attracting thousands of tourists and locals every day. Over the years it has also housed some of the most iconic cafés and patisseries in the city, including Crystal, Olympus and Alhambra, alongside seven historic cinemas (Hellenis, Elysia, Rex, Zephyros, Rio, Olympia, Olympia) and four luxury hotels (Olympus-Pallas, Mediterranean, Majestic, Splendid) in the wider area around the seafront.

From the end of the 19th century until present, the Avenue has changed a number of names, such as “Beyaz Kule Avenue” – during the Ottoman rule until the liberation in 1912; “Vasileos Konstantinou Avenue” – until 1939; and finally “Nikis Avenue” – from 1939 onwards, commemorating victory in the Balkan Wars of 1912-13.

The wide pedestrian sidewalk, directly on the waterfront, has been a constant lure for both visitors and locals, seeking to stroll down the famous avenue and enjoy the expansive sea views.
Image Courtesy of Flickr and Tilemahos Efthimiadis.
Sight description based on Wikipedia.
4

4) White Tower of Thessaloniki (must see)

The 23 meters (75 feet) tall White Tower is known as the symbol of Thessaloniki. The Ottomans built the tower around 15th century. It is thought that the fortress was designed by the famous Ottoman architect Mirmar Sinan. It was originally surrounded by fortified walls and was an essential part of Thessaloniki's defenses.

When it was first constructed, it was known as the Lion Tower to honor the Ottoman's victory. The tower was part of the old city's walls and separated the Jewish quarter from the Muslim quarter.

It was renamed the Tower of Kalamaria in the 17th century. It was then used as a garrison. Next, the tower was used as a prison and became known as the Tower of Blood or the Red Tower. During this time, the tower was the site of torture and execution. For example, in 1826, Sultan Mahmud II ordered the massacre of the rebellious Janissaries imprisoned in the tower.

Finally, the tower was painted white in 1891 and named the White Tower. Some historians suggest that the Ottoman Empire sought to "whitewash" the tower's brutal torture history with a change of paint and a new name. While the truth behind the change is unknown, the White Tower name has stuck.

Thessaloniki's air defense operated from the tower from 1912 to 1983. The tower also housed a meteorological laboratory.

Visitors can enjoy expansive views of the city and Thermaic Gulf from the top floor. In addition, the promenade in front of the tower is a popular spot for photos and meetings.

The White Tower is home to a museum that celebrates Thessaloniki's history. Exhibitions explore the city's history from its founding in 316 BC to today.
Image Courtesy of Wikimedia and www.bdmundo.com.
5

5) Statue of Alexander the Great

Alexander the Great was undefeated in battle. But, unusually, he didn't seek to change the beliefs or customs of the territories he conquered.

The statue shows Alexander looking east while his faithful horse Bucephalus seems ready to fight. Behind the statue, a low wall depicts the Battle of Issus, which happened in 333 BC. During the battle, Alexander the Great defeated the Persian king Darius III. Other features show shields depicting Alexander's army, a snake, a lion, an ox, a falcon, and Gorgon Medusa.

The statue overlooks Thessaloniki's waterfront and is part of the Nea Paralia seaside park.
Image Courtesy of Flickr and Traveling_Shan.
6

Nea Paralia (New Waterfront) is a seaside park in Thessaloniki, and is one of Greece’s most beautiful new public spaces. Since opening in 2013, this revitalized waterfront area has been a local landmark attracting numerous visitors and international accolades. The venue constitutes one of the biggest regeneration projects ever carried out in the city, covering 50,800 m² with 1,100 trees, expanses of greenery and water.

This architectural feat by Prodromos Nikiforidis and Bernard Cuomo, renowned as one of the best promenades, perfectly combines natural elements and attractive design, and has taken more than a decade to complete. The three-kilometer retreat features 12 themed gardens, including those of Water, Music, Roses, Sound, Memory and others.

Punctuated by sculptures, beautiful fountains and marble benches, the boardwalk throngs with regular joggers, fishers, cyclists, and those busking or just gazing out to sea. Facilities such as cycling paths, sports grounds, children’s play areas, refreshment outlets and an amphitheater, contribute to an attractive atmosphere. Additional feature for kids is a small train. Thanks to the abundance of restaurants and bars on the site, the New Waterfront is just as attractive at night as it is during the day.

On a clear day, you can see as far as Mount Olympus from here. For extra fun, you may hire a ThessBike bicycle (1 euro per hour) or take a free harbor cruise on one of the floating bars moored by the White Tower.
Image Courtesy of Wikimedia and Salonica84.

Thessaloniki's Upper Town (Ano Poli) is the most ancient part of the city, aged approximately 2,300 years. Being also the highest part of Thessaloniki, dominated by the Acropolis with the Byzantine-/Ottoman-era fort known as Heptapyrgion (Eptapyrgio), from here on a clear day you can see way across the gulf, as far as Mount Olympus, some 80 km (50 miles) away, towering over the horizon in all...  view more