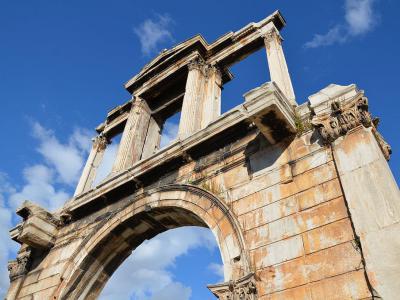 This triumphal arch was built to celebrate the arrival of Roman Emperor Hadrian and to honor him for his many benefactions to the city. It serves as a gateway between the ancient part of Athens and the then new district constructed mostly during the rule of Hadrian, who reigned over the Roman Empire until the year 138 A.D. Hadrian was a great admirer of classical Greek literature, philosophy and arts. During his reign, he sponsored a number of important projects in Athens, including the Library of Hadrian and the Hadrianic Aqueduct, as well as the completion of the Temple of Olympian Zeus, among others.

The entire monument to honor Hadrian is made of marble from Mt. Pentelikon, located 18 km away. The design is fully symmetrical from front to back and side to side; however, while the lower part recalls similar Roman arches, the top is typical of a Greek arch. There is one inscription on the west side that reads, "This is Athens, the ancient city of Theseus." There is also an inscription on the east side that reads, "This is the city of Hadrian and not of Theseus." This monument can be viewed for free on your walk through Athens; but, if you want to get up close you'll need to either buy a ticket to the Temple of Olympian Zeus or a combination ticket for the major archaeological sites of Athens.

Why You Should Visit:
Worth a stop to understand the relationship between the Roman Empire and its province of Achaea, conquered by the Romans in the year 146 BC.

Tip:
It can be viewed for free but if you want to get up close you'll need to either buy a ticket to the Temple of Olympian Zeus or a combination ticket for the major archaeological sites of Athens.
Image by Carole Raddato on Wikimedia under Creative Commons License.