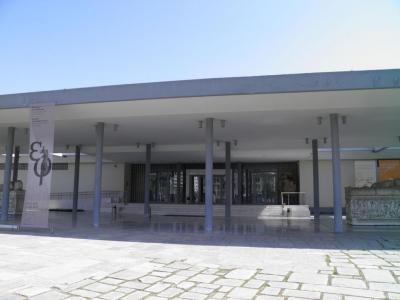 The Archaeological Museum of Thessaloniki stores findings from the Archaic, Classical, Hellenistic, and Roman periods, excavated within the city and the surrounding region of Macedonia. The museum is housed in a building designed by architect Patroklos Karantinos, an example of modern Greek architectural trend. The museum's new wing hosts two exhibitions, "The Gold of Macedonia," featuring findings from the cemeteries of Sindos, Agia Paraskevi, Nea Filadelfia, Makrygialos, Derveni, Lete, Serres, and Evropos; and "The Thessaloniki Area in Prehistory," with findings from prehistoric settlements dating from the Neolithic to the Late Bronze Age.