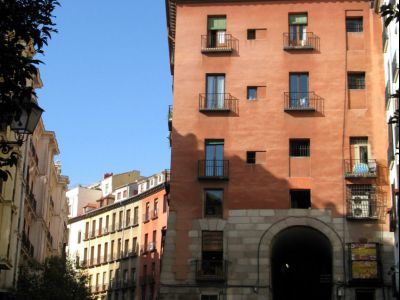 The largest and liveliest plaza in Madrid is the Plaza Mayor and you can gain access to it through nine archways, the most famous of which is the Arco de los Cuchilleros.

The archway is more a street than a simple arch between one place and another. Reached by a flight of stone steps, the Cutler’s Arch was once where the city’s cutlers and sword makers plied their trade.

Nowadays it has taverns and handicraft shops where you can buy handmade souvenirs, including pottery, leather goods, wood-carvings, wicker baskets and silver jewelry. In one of the taverns you can watch, or even take part in, flamenco dancing.

The Plaza Mayor was built in the early 17th century, but after a fire destroyed most of it in 1790, the Spanish architect, Juan de Villanueva, redesigned the square in the style you can see today. The plaza has served many purposes over the centuries: it was a market, a bullring, a gathering place for public executions, an open-air theater and where many tournaments took place.

Today it is a great tourist attraction with its cafes, restaurants and shops. In late November until the end of the year it is the site of the biggest Christmas market in Madrid, and on Sundays there is an important market for coin and stamp collectors.
Image by laura padgett on Flickr under Creative Commons License.
Sight description based on wikipedia

Buen Retiro Park is one of the main attractions of the city of Madrid. Known to the locals simply as "El Retiro," the park is a favorite place to spend weekends and summer days. It was a royal park up until 150 years ago. Highlights of the park include several fountains, palaces, monuments and arranged gardens. Discover this historical site step by step in this self-guided walking tour.

There have been many writers who've expressed a love for Madrid, but one who did so quite famously was Ernest Hemingway – a frequent visitor of the city, in which he found his muse, popular success, and critical acclaim. Don Ernesto, as he was called in Spain, was a welcomed and frequent visitor to a few places in Madrid. Follow this self-guided walking tour to revisit Hemingway's old...  view more

Madrid is a vibrant metropolis made up of 21 districts. This walk takes you to explore Salamanca, one of the wealthiest and most expensive neighborhoods of the Spanish capital, home to Madrid's Golden Mile with stylish boutiques and upscale venues, and many other prominent historical and cultural attractions.

If you would like to explore Madrid's Golden Mile with its high-end...  view more