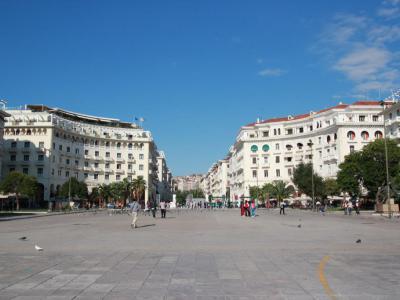 Aristotelous Square is the main city square of Thessaloniki and is located in the city center. It was designed by French architect Ernest Hébrard in 1918, but most of the square was built in the 1950s.

Many buildings surrounding the central square have since been renovated and its northern parts were largely restored in the 2000s.

Aristotelous Square is one of the most famous places in all of Greece and almost synonymous with the city of Thessaloniki itself.

Numerous large rallies and political speeches have been organized in Aristotelous Square, such as the rally for Macedonia in 1992. Additionally the square is used for many cultural events, such as festivals and the annual Christmas and carnival celebrations. The numerous cafes and bars that line up the square make it popular with the younger generations.

The two quarter-circle sides of the square are occupied by important buildings. On the left is Electra Palace Hotel, which is one of the best five-star hotels in Thessaloniki and on the right is one of the city's most famous movie theaters, the Olympion Theatre cinema, site of the annual Thessaloniki International Film Festival. It also houses a very popular bar of the same name.

The twelve buildings that make up Aristotelous Square have been listed buildings of the Hellenic Republic since 1950.