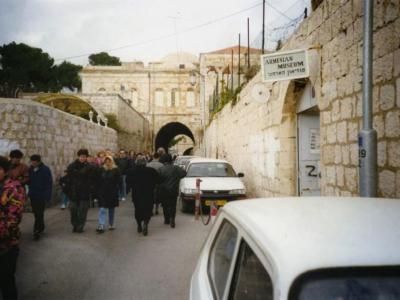 Note: Temporarily closed, with an estimated reopening in the fall of 2020.

Set in a rather magnificent open courtyard just off the main road to the Armenian Quarter, this museum gives a rare glimpse into the art, culture and history of Jerusalem's Armenian community. Its rich collection is arranged in nearly 40 rooms and features Roman and Byzantine mosaics alleged to have been made by Armenian artisans, but perhaps the most substantial and exquisite exhibits are the jewel-encrusted, brightly colored, illuminated manuscripts, some dating back to the 10th century.

Other highlights include the first printing machine of the Middle East and some of the first photos of Jerusalem, depicting 19th-century everyday life in the Holy City, intricate 17th-century filigree artifacts, and ritual objects such as jeweled crosses, miters, and embroidery.

Another section is devoted to the Armenian Genocide, with numerous testimonies and facts about the crimes committed in the name of ethnic purity and religious supremacy.