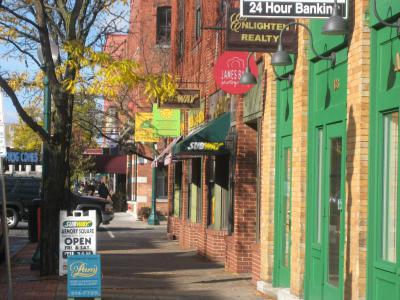 Armory Square is a small neighborhood on the west side of Downtown Syracuse, New York. It began life as a busy commercial and industrial area just to the west of the central city.
Today, Armory Square is the home of some of Syracuse's better restaurants, at least two coffeehouses, a radio station company, dozens of small shops selling everything from band instruments to used records to women's clothing, several bars and nightclubs, Urban Outfitters, Armory Massage Therapy, a newly restored upscale hotel, and two tattoo parlors. A number of professional firms are also located in Armory Square, including Eric Mower and Associates, O'Brien & Gere, and the Sugarman Law Firm. The area is popular with students from Syracuse University and Le Moyne College.
Its borders are generally considered to be the circular road around the armory (Jefferson Street) to the south, Onondaga Creek to the west, Washington Street to the north, and Clinton Street to the east.
Armory Square is also home to the Shot Clock Monument.
A paved multi-use trail, the Onondaga Creekwalk, connects the neighborhood with Onondaga Lake.
Image by Joegrimes on Wikimedia under Creative Commons License.
Sight description based on wikipedia