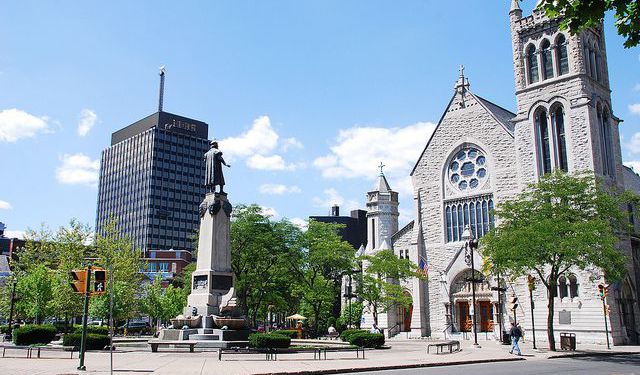 Image by Felipe Ortega on Flickr under Creative Commons License.

Syracuse, NY is home to a number of historic and cultural attractions. Among them the most notable are the Erie Canal Museum, housed in the last remaining 1850 Weighlock Building in America, the Milton J. Rubenstein Museum of Science & Technology, and the opulent 1920s Landmark Theatre hosting Broadway hits and concerts. To see these and other distinguished sights of Syracuse, follow this orientation walk and have a great time!
How it works: Download the app "GPSmyCity: Walks in 1K+ Cities" from iTunes App Store or Google Play to your mobile phone or tablet. The app turns your mobile device into a personal tour guide and its built-in GPS navigation functions guide you from one tour stop to next. The app works offline, so no data plan is needed when traveling abroad.

Clinton Square is the historic center of downtown Syracuse, New York and was named in honor of 19th century politician, DeWitt Clinton who served two terms as Governor of New York State. During his tenure, Clinton was instrumental in the construction of the Erie Canal which ran through the center of the square. Here is Soldiers' and Sailors' Monument,which was donated by Charles M. Warner.
Image by Felipe Ortega on Wikimedia under Creative Commons License.
Sight description based on wikipedia
2

Hanover Square is a triangular-shaped public park located at the intersection of Warren, Water, and East Genesee streets. The triangle was originally named Veteran's Park. It was renamed to Hanover Square after the Soldiers' and Sailors' Monument was dedicated in Clinton Square in 1910 and the function of commemorating Syracuse's war dead was shifted there.The trianguler shape of the park came as a result of the city's new grid street system in the early 19th century which was "superimposed on the diagonal route" of early Genesee Turnpike (now known as Genesee Street).

Listed on the National Register of Historic Places since 1976, the square is an intact, mainly nineteenth century historic district.Hanover Square has changed little since the Civil War. Several of the buildings date to the period that ran from 1830 through 1860. Newer buildings date to the late 19th century, such as the Onondaga County Savings Bank which was constructed in 1896.

Image by SirJasalot on Wikimedia under Creative Commons License.
Sight description based on wikipedia
3

The building that today houses the Erie Canal Museum was used by the New York State Department of Public Works until 1954. In 1956 the building was to be given to the New York State Department of Education, but the governor vetoed this proposal, believing that the building might stand in the way of a future highway interchange. After intense lobbying from the Junior League of Syracuse, the building was given to local authorities under the condition that it house a “public canal museum”. This is how in 1962 the Erie Canal Museum came into existence and the last remaining Weighlock Building in America was preserved. The museum is visited every year by thousands of people from all around the world. The museum is open Monday to Saturday from 10 a.m. to 5 p.m. and Sunday from 10 a.m. to 3 p.m. It is closed on official holidays.
Image by Tiina Toomet on Wikimedia under Creative Commons License.
4

Syracuse City Hall has an unusual design for a civic building. It was designed in the Romanesque Revival style by architect Charles E. Colton and was built between 1889 and 1893 using Onondaga limestone. The building has a 165-foot-high bell tower. There was some controversy regarding the bell, as the mayor wanted to use the bell from the original city hall that was demolished in order to make room for the new building. The architect opposed this idea, and the mayor decided to fire him. The mayor won out and the bell from the original city hall was in use until 1939, when it was removed, melted, and used to help the war efforts during World War II. In 1977 City Hall was renovated. A decade later, an electronic carillon was installed in the tower along with a decorative, brass-plated, aluminum bell.
Image by Joegrimes on Wikimedia under Creative Commons License.
5

Columbus Circle is a neighborhood and plaza in the downtown section of Syracuse. Columbus Circle is home to Syracuse's two cathedrals, the Episcopalian St. Paul's Cathedral and the Roman Catholic Cathedral of the Immaculate Conception. As well as County Court House and the County's John H. Mulroy Civic Center, home of the Onondaga County Government.

The idea to erect a monument to Christopher Columbus in Syracuse came from a group of Italian-Americans. Initially the statue was to modeled after one of Columbus located in Florence, Italy, but this idea was later set aside. In 1928 a contest was organized to select a design for the monument. After a few years of deliberation, it was decided to build the monument at St. Mary's Circle between the courthouse and the Cathedral of Immaculate Conception. The monument was finally built in 1932. Columbus Monument was designed by the Syracuse-born architect, Dwight James Baum.

Image by Ed on Flickr under Creative Commons License.
Sight description based on wikipedia
6

6) Cathedral of the Immaculate Conception

The Cathedral of the Immaculate Conception is the seat of the Roman Catholic Diocese of Syracuse.

The Cathedral was consecrated in 1910 and for the dedication, Pope Leo XIII gave Bishop Ludden a brick taken from the Holy Door at St. Peter’s Basilica in Rome.

The Cathedral features the Shrine of the Blessed Mother having a statue sculpted by LeMoyne College Professor Jacqueline Belfort-Chalat.

In 2013, in the area of the Sacred Heart Altar, a mosaic was installed depicting Saint Marianne Cope surrounded by her leper patients in Hawaii. Custom made in Italy, it is 10 ft. by 5 ft. Saint Marianne Cope, a Sister of Saint Francis, was raised and ministered much of her adult life in Central New York before going to Hawaii to care for the lepers (Hansen's Disease).

The Cathedral hosts many local musicals and concerts performed by both area schools and professional groups.

Image by Joegrimes on Wikimedia under Creative Commons License.
Sight description based on wikipedia
7

The Landmark Theatre, originally known as Loew's State Theater, is an historic theater from the era of "movie palaces". Designed by Thomas W. Lamb, it is the city's only surviving example of the opulent theatrical venues of the 1920s.

Originally named Loew's State Theatre, it opened on February 18, 1928, and offered double bills of famous vaudeville stage acts and first-run films. During the Great Depression and World War II it continued to do good business, as theater patrons escaped for a few hours into its plush grandeur. However, by the 1970s, the theater suffered from low attendance and was in disrepair. Eventually it closed, and was in danger of demolition. In 1977 a group, Syracuse Area Landmark Theatre, or SALT, was formed to preserve and renovate the venue. Still open today, the Landmark offers concerts and other performances, is available for weddings and other private parties, and continues to sponsor fundraisers to support its activities.
Image by John Hoey on Flickr under Creative Commons License.
Sight description based on wikipedia
8

8) Museum of Science and Technology (must see)

The Milton J. Rubenstein Museum of Science and Technology (often referred to as the MOST) includes multiple exhibits and a domed IMAX movie theatre. It is located in a historic building, the former Syracuse Armory.

The original museum, then known as the Discovery Center, opened its doors on November 15, 1981 in a storefront at 321 South Clinton Street in downtown Syracuse. This first hands-on, participatory science museum in Upstate New York hosted over 42,000 in its first year and consistently had the highest visitor density ratio in the nation.

By the late 1980s, museum officials began to consider a new location for the museum, which had become an important community asset visited by more than 800,000 people.

In 1992, New York State and the federal government accepted the Discovery Center’s proposal to open a Museum of Science & Technology in the Armory building.

It is also is home to the MOST Science Shop where toys, games, and science education products can be purchased.

Armory Square is a small neighborhood on the west side of Downtown Syracuse, New York. It began life as a busy commercial and industrial area just to the west of the central city.

Today, Armory Square is the home of some of Syracuse's better restaurants, at least two coffeehouses, a radio station company, dozens of small shops selling everything from band instruments to used records to women's clothing, several bars and nightclubs, Urban Outfitters, Armory Massage Therapy, a newly restored upscale hotel, and two tattoo parlors. The area is popular with students from Syracuse University and Le Moyne College. Armory Square is also home to the Shot Clock Monument.

Its borders are generally considered to be the circular road around the armory (Jefferson Street) to the south, Onondaga Creek to the west, Washington Street to the north, and Clinton Street to the east.

A paved multi-use trail, the Onondaga Creekwalk, connects the neighborhood with Onondaga Lake.
Image by Design for Health on Flickr under Creative Commons License.
Sight description based on wikipedia