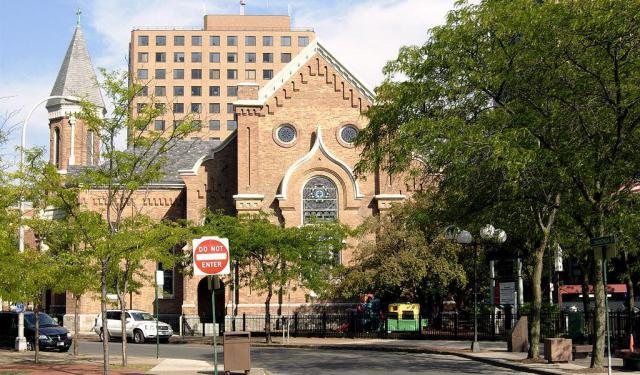 Image by Crazyale on Wikimedia under Creative Commons License.

Syracuse, NY is a melting pot of religious traditions and beliefs, which is evident in the local religious architecture. Most Christians in the city are Catholic, reflecting the influence of 19th and early 20th-century immigration patterns, when numerous Irish, German, Italian and eastern European settlers. Other than Catholic, there are dozens of other churches in the city, including Eastern Orthodox, Jehovah's Witness, Christian Science, Reformed Presbyterian, and Metaphysical Christian. Some of these are quite notable in terms of architectural and historical heritage. Here are the most prominent ones.

The Cathedral of the Immaculate Conception – consecrated in 1910, it features the Shrine of the Blessed Mother with a statue sculpted by LeMoyne College Professor Jacqueline Belfort-Chalat.

Another major historic temple in Syracuse is the Episcopal St. Paul's Cathedral, a Gothic-style edifice built in the early 1800s, added to the National Register of Historic Places on December 1, 1978.

Plymouth Congregational Church – designed in 1858 by Horatio Nelson White in the Romanesque Revival style. Its founding congregation was closely associated with the abolitionist movement in Syracuse. The church was listed on the National Register of Historic Places on November 7, 1997.

Grace Episcopal Church – a historic Episcopal parish founded in 1871. This Gothic Revival building was also designed by Horatio Nelson White and was constructed in 1876. The church has a long history of social activism. In the late 1900s, David Pendleton Oakerhater, a Cheyenne warrior and political prisoner was baptized and ordained here. On March 20, 1973, the building was listed on the National Register of Historic Places.

To learn more about these and other impressive churches and cathedrals of Syracuse, NY, take this self-guided walking tour.
How it works: Download the app "GPSmyCity: Walks in 1K+ Cities" from iTunes App Store or Google Play to your mobile phone or tablet. The app turns your mobile device into a personal tour guide and its built-in GPS navigation functions guide you from one tour stop to next. The app works offline, so no data plan is needed when traveling abroad.

St. Paul's Cathedral was built in the 1850s and was designed by architects Henry Dudley and Frank Wills in the Neo-Gothic style. The cathedral is part of the Episcopal Diocese of Central New York and is located in the heart of the city near the Onondaga Historical Museum, the Civic Center and the Roman Catholic Cathedral. In order to help the homeless and poor, the cathedral opened the Samaritan Center, which has many active programs for these at-risk members of society.

The locally prominent White family was closely associated with St. Paul's since its founding. It was observed that "the name [White] should always be woven into the history of St. Paul’s."

- Horace White (1802-1860; banker and businessman) was a vestryman for over twenty years and warden, and is honored with a stained glass window on the south aisle.
- Clara Dickson White (1811-1882; wife of Horace) donated money for construction of the church tower. The church spire was dedicated in her honor.
- Hamilton White (1807-1865; banker and brother of Horace), was a vestryman for many years and served on the building committee, and is honored by the White Memorial Chancel Window.

The spire and windows were dedicated in 1907 by Horace and Clara's sons Andrew Dickson White (1832-1918; co-founder and first president of Cornell University) and Horace Keep White (1835-1915; banker and head of a salt company).


Image by Kenneth C. Zirkel on Wikimedia under Creative Commons License.
Sight description based on wikipedia
2

2) Cathedral of the Immaculate Conception

The Cathedral of the Immaculate Conception dates to 1910. One of the church's most beloved highlights is its Shrine of the Blessed Mother. The statue's artist is Jacqueline Belfort-Chalat, a professor at LeMoyne College. This area is a popular place for visitors to pray in the cathedral, along with the area near the Sacred Heart Altar.

Besides being a popular place for prayer and reflection, the area near the Sacred Heart Altar is host to another important piece of art. This area features a mosaic in honor of St. Marianne Cope, a Franciscan sister from central New York. The saint became known for ministering to a colony of lepers in Hawaii.

Concerts and musicals are regular events here, in addition to the daily Masses. Local colleges and high schools make up some of the most frequent performers. Professional groups have also performed at the cathedral because of its excellent acoustics.
Image by Joegrimes on Wikimedia under Creative Commons License.
3

Plymouth Congregational Church was built between 1858 and 1859, and the dedication service was held in August 1859. Its 3,000-pipe Moller organ was installed in 1930. That same year a new wing, several offices, and educational facilities were added to the church. In 1948 Plymouth Congregational Church merged with Good Will Church. The church was listed on the National Registry of Historic Structures in 1997, enabling it to obtain a grant for necessary repairs. Some of the stained glass windows are currently being restored.
Image by Jenniffer Miller on Flickr under Creative Commons License.
4

Park Central Presbyterian Church was founded in 1846. The church was built in 1872 and was designed by Archimedes Russel, a noted Syracuse architect. The church has a Henninger Memorial organ, one of the finest organs in central New York. The organ was installed in 1967. The church offers a variety of educational programs for adults, youth and children.
Image by Frederika Eilers on Wikimedia under Creative Commons License.
5

Grace Episcopal Church is an historic Gothic Revival church. Grace Church was founded in 1871. The current church was constructed in 1876 and designed by Horatio Nelson White.

On March 20, 1973, it was listed on the National Register of Historic Places.

Grace Church has a long history of social activism. Grace Church is a national shrine for Saint Oakerhater - the first Native Episcopal saint. In 2004, windows were installed in his honor and in 2005, a celebration with Saint Oakerhater's decedents was held at Grace. In 1957, Grace Church joined with St. Philip's - a historically black Episcopal Church - establishing grace as one of the first fully integrated Episcopal churches in the nation.

Grace Episcopal Church continues to be an active social justice parish in the Episcopal Diocese of Central New York. Its congregation is of the most racially integrated in the nation, and Grace continues to be a welcoming parish to people of all races, ethnicity, theological backgrounds, sexual orientation and gender identity.
Image by ZeWrestler on Wikimedia under Creative Commons License.
Sight description based on wikipedia

Syracuse is New York's fifth-most populous city and the county seat of Onondaga County. However, these facts only tell part of this city's story. As a significant crossroads throughout local and national history, this city has had a diverse population and contributed much to the nation's economy.

The area's original inhabitants were members of the Onondaga Nation, a tribe...  view more