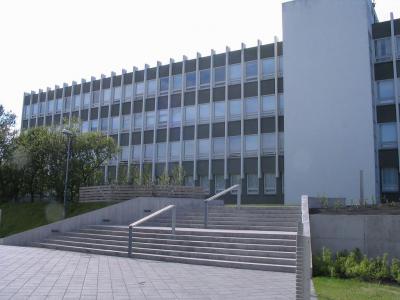 The Árni Magnússon Institute for Icelandic Studies (Stofnun Árna Magnússonar í íslenskum fræðum) is an institute of the Ministry of Education, Science and Culture of Iceland which conducts research in Icelandic and related academic studies, in particular the Icelandic language and Icelandic literature, to disseminate knowledge in those areas, and to protect and develop the collections that it possesses or those placed in its care. It is named after Árni Magnússon, a 17th-18th century collector of medieval Icelandic manuscripts.

The institute had the task of preserving and studying medieval Icelandic manuscripts containing Landnáma, Heimskringla and the Icelandic sagas. On September 1, 2006, this institute was merged with the Icelandic Language Institute, the University of Iceland Institute of Lexicography, the Sigurður Nordal Institute, and the Place-Name Institute of Iceland to create the current Árni Magnússon Institute for Icelandic Studies. It is a university institution with its own board and financing. The Minister of Education, Science and Culture appoints a five-member board for four-year terms. Three members are appointed according to nomination by the University Senate and two without nomination, with one of those two acting as chairman. The Minister appoints a director for five-year terms on the recommendation of the board.
Image by Haukurth on Wikimedia under Creative Commons License.
Sight description based on wikipedia