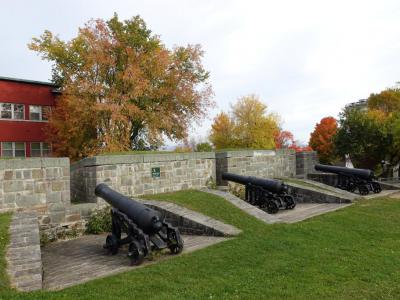 The position of the Parc de l'Artillerie, looking out over the west of the city and across the St. Charles River, has made it a strategic military site since the late 17th century. Four vastly different buildings trace the city's history from the French regime right up to the 1940s. Of the four buildings that make up the site, the Dauphine Redoubt is the most striking, with massive white supports that plunge down the side of a hill.

Built in 1712 and completed in 1748, it was army barracks both before and after the British conquest and eventually became the home of the superintendent. During the summer, characters in period costume bring the barracks to life with demonstrations and tours through the rooms, which have been decorated to reflect various periods in the building's evolution. On display is also a fascinating model of Québec City, built between 1795 and 1810 by military engineer Jean-Baptiste Duberger for strategic planning, making for an unparalleled source of information on the layout of the city in the years following the British conquest.

Why You Should Visit:
While walking around the park is itself an enjoyable activity, the museum is charming and well-presented.
With lots of billboards and displays, it is easy to understand and appreciate the history of the area.

Tip:
Get the self-guided audio tour. It takes about 2 hrs to go through the entire complex, and you can pace yourself.