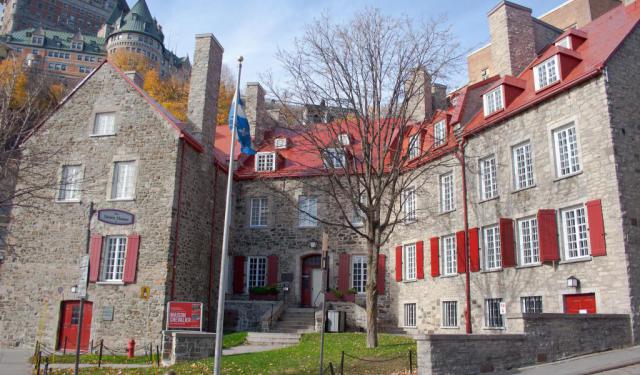 Often referred to as the cradle of New France, Québec City has one of the richest architectural heritages in North America and is particularly evocative of Europe in its atmosphere. Most of the city's architecture, however, had to be adapted to harsh winters and the lack of specialized workers and materials in the colony; as such, most houses were designed as simple and efficient before anything else. While not overly extravagant, the more developed buildings in this walk stand out among the rest, and will give you a wonderful glimpse into the lives of several pioneers of Canadian civilization.
Image Courtesy of Flickr and Paul VanDerWerf.
How it works: Download the app "GPSmyCity: Walks in 1K+ Cities" from iTunes App Store or Google Play to your mobile phone or tablet. The app turns your mobile device into a personal tour guide and its built-in GPS navigation functions guide you from one tour stop to next. The app works offline, so no data plan is needed when traveling abroad.

The historic Jean-Baptiste-Chevalier house is a classical French Maison and a fine piece of New France's urban architecture. A former hotel, it was the ﬁrst building in the Place-Royale area to be restored in the 1950s.

The current structure is in fact three separate houses from three distinctive periods: Maison de l'Armateur Chevalier (home of a former shipowner Jean-Baptiste-Chevalier), built in 1752; Maison Frérot, with a mansard roof built in 1683 (or 1695); and Maison Chesnay, dating from 1660 (or 1675).
The complex was destroyed by fire and rebuilt in 1762.

All the three houses were repaired or partially rebuilt following the British Conquest, and used for commercial purposes. As a group, they were rescued from deterioration by Gérard Morisset, the influential director of an art works inventory, who suggested that they be purchased and restored by Québec's government, which in turn has prevented the demolition of the Royal Square itself.

From 1807, the house was rented by its owner, George Pozer, to an innkeeper who had London Coffee House inscribed on the facade; thus the Chevalier house was known by this name until the early 20th century. The Maison Chevalier, twinned with its two neighbors, was classified as a historic monument and became a museum in 1965. In April 2013, Maison Chevalier was renamed Maison historique Chevalier.

With the iconic Château Frontenac visible in the background, this is an excellent place to walk around while soaking in the area's beauty and history. During the Quebec Carnival in February, it is also a great place for traditional music evenings.


Image Courtesy of Flickr and Reading Tom.
Sight description based on Wikipedia.
2

The main entrance to the Old Quebec funicular is located in the historic House Louis Jolliet, at 16 Petit-Champlain Street. One of the earliest dwellings in Old Québec (1683), this house was built after the great fire of 1682 by the architect Claude Baillif for Louis Jolliet, who lived here until his death in 1700.

Louis Jolliet was an explorer, cartographer and hydrographer, and proved to be the first Quebec-born Canadian to make history. During one of his expeditions, he discovered and mapped the Mississippi River. The first person of European parentage to accomplish such feat, he taught hydrography at the Séminaire de Québec during the last years of his life.

The fire, which had almost completely razed Basse-Ville, eventually prompted the authorities to require all buildings to be made of stone and equipped with firewalls. Among other things, the decision resulted in the spread of first suburbs outside the city walls, since poorer settlers could not meet the costly new requirements and were forced to move out of town.

Heavily damaged during the British Conquest and a number of fires that happened later on, the house nonetheless has retained some of the features from the original design attributing to the urban architecture of the French Regime. Although transformations have reduced its state of authenticity, the location at the top of rue Sous-le-Fort gives it a privileged position in the urban landscape of the neighbourhood. Access to the funicular from the terrace also adds to its importance.

The building contributes to the specificity of the declared site of Old Quebec as a UNESCO World Heritage Site.
Image Courtesy of Wikimedia and Tony Webster.
3

While access to the site is restricted, the courtyard and the outbuildings, where a restaurant is located, are accessible to the general public. A pamphlet and commemorative plaque provide the houses' history.
Image Courtesy of Wikimedia and Lëa-Kim Châteauneuf.
4

Built in the mid-17th century (1648) by the Chartier de Lotbiniere family, this might be Québec's oldest building. It's most famous for being the house in which France signed the 1759 capitulation to the British forces. Ironically, the house was occupied by France Consulate General before being turned into a tourist lodging. Its name comes from the Duke of Kent, Queen Victoria's father, who lived here for a few years at the end of the 18th century, just prior to marrying Victoria's mother in an arranged liaison. His true love, Madame de Saint Laurent, was with him in Maison Kent, which has since underwent a number of renovations.
Image Courtesy of Wikimedia and Jeangagnon.
5

The house's Greek Revival facade, a masterpiece of the genre, is tastefully decorated with palmettes and discreet laurel wreaths. The main floor has huge bay windows that open onto a single expansive living room in the London style. From the time of its construction, the house incorporated all the modern amenities: central heating, hot running water and multiple bathrooms. Antoine de Saint-Exupéry, author of "The Little Prince", was hosted here by the De Koninck family in the early 1940s.
Image Courtesy of Wikimedia and Selbymay.
6

The property's official recognition also refers to the adjoining buildings, including the Saint-Louis barracks at the rear, and the Squash Ball Court, former workshop, garages and warehouse, built in different eras along the property's west border.
Image Courtesy of Wikimedia and LBM1948.
7

Due to its historical and architectural importance, as well as the environmentally privileged place it occupies, the house's heritage value was officially recognized in 2001. While the exterior evokes the cubism of early 20th-century "Four Square" houses, the interior plan and finish clearly reflect the former occupants' professional status, including the high-quality woodwork and fireplaces. Further illustrating the lifestyle of high-class families in 1950s Québec City are period furnishings, costumed guides, and several multimedia touches.
Image Courtesy of Wikimedia and Jeangagnon.
8

Take afternoon tea and cake in this charmingly authentic 19th-century cottage – one of the few remaining Regency-style Anglo-Norman cottages around. This type of colonial British architecture is distinguished by a large pavilion roof overhanging a low veranda surrounding the building.

Built in 1849 for Mrs. William Henry, the wife of a rich wood merchant, the house – which once used to mark the border between city and country – is now found on one of the biggest boulevards, but inside it has retained its elegant and rich decor. There are only a few rooms to visit, but the collection they house is amazing, with actual items that the Stuart family owned and used. Tours of the building and the original garden give visitors an idea of what life was like for well-to-do English families in Québec at the turn of the 20th century, as well as of how quickly the world has changed.

It's also lovely to have lemon cake and tea on the veranda at the end of the hour-long tour!
Image Courtesy of Wikimedia and Jeangagnon.