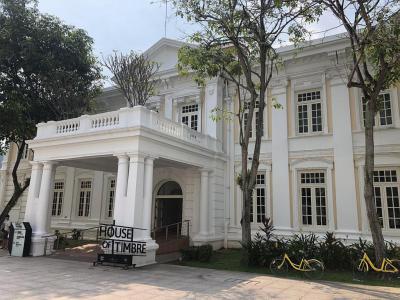 Sitting right beside Raffles' landing point and statue is the Arts House (formerly Old Parliament House), a multi-disciplinary arts venue which today hosts exhibitions, concerts and other similar functions. Built in 1827, this is the oldest surviving government building and perhaps the oldest surviving building at all in Singapore. From 1965 to 1999 it served as the seat of Singaporean Parliament until the latter moved to a new adjacent location.

In the course of nearly 200 years, this building has played an active role on Singapore's first, political and then artistic scene. Designed by architect George Drumgoole Coleman as a Neo-Palladian mansion for private use, it was then made a public property, and was first used as a courthouse and other government offices, including the Land Office. In 1839, a new single-storey annex was built on an adjacent plot of land, forming what is now the Former Attorney General's Chambers which was later incorporated into the Parliament House.

Throughout history, this building has undergone several major extensions including those in 1873-1875 and 1901, during which it was extended towards the Singapore River and lost the original Coleman's design. In 1909, two courtrooms were reconstructed and a residence for the Attorney General was added, seeing the architectural style transform from Neo-Palladian to the more Victorian. The building was again refurbished in 1953-1954 to make way for the new Legislative Assembly of Singapore.

As of 26 March 2004, it has been a heritage center for artists, writers and ideas, supporting and presenting programs and festivals aimed at developing and promoting creativity in Singapore. For this purpose, the old building was restored and its furnishings and design, including Tuscan style-columns and cornices, carefully preserved.

Why You Should Visit:
Interactive gallery enabling visitors to immerse in the arts scene of Singapore, to see the latest works of local artists, and to learn about Singapore development over the last 50+ years.
Great selfie opportunity in the chair of the first Prime Minister of Singapore is a bonus.

Tip:
During the day the place is open and free, and usually not busy – you can virtually have it all to yourself (and a security guard). Takes only a few minutes to look round.