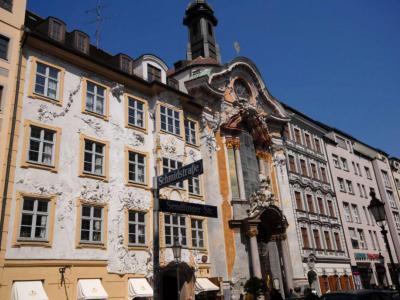 The official name of this building, popularly known as the Asam Church, is the St. Johann Nepomuk Church. Albeit small, this temple is renowned for having the most opulent interiors of all the religious sites in Munich.

The сhurch was built between 1733 and 1746 by brothers Cosmas Damian and Egid Quirin Asam, hence the name, and was dedicated to the Bohemian monk, named Johann Nepomuk, who was revered as a martyr for having been drowned in the Danube on the orders of King Wenceslaus after refusing to divulge the confessions of the Queen. The Asam brothers intended this church to be their family’s private, but eventually were forced to make it public.

The Asam Church is one of the finest examples of the late German Baroque architecture. It has 12 rows of pews for a small family congregation. The interiors are covered in frescoes painted by Cosmas Damian Asam. A lavish fresco on the ceiling portrays the drowning of Saint Nepomuk. The high altar has four twisted columns with a glass shrine containing a wax figure of the saint. There is a beautiful sculpture depicting God the Father bending over the crucified Christ in the cornice. The interior ornamentation today is the result of careful restoration done between 1975 and 1982.

Why You Should Visit:
Gaudy and Baroque in a very unique way you don't get to see very often. What it lacks in size, it surely makes up for in decoration: fresco, marble, stucco and acres of gilding compete for attention. Such heavy decoration may be not to everyone's taste, but is hard not to marvel at.

Tip:
As with everything, try going early in the morning to avoid crowds blocking your photos (avoid mass times).
It's best to try to visit on a sunny day, so that the gold and other bling have more of a chance to shine.