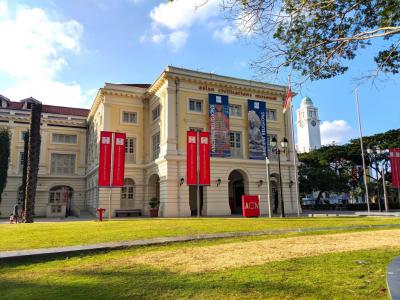 The robust former Empress Place Building, located at the mouth of the Singapore River, is one of the city's architectural treasures – elegantly proportioned and symmetrically laid out, adorned with many decorative features, such as exquisite plaster mouldings, architraves, and cornices. Completed in 1867 and named after Queen Victoria, it still wears the original Neoclassical Palladian exterior, despite having undergone a series of renovations and extensions, featuring same Roman Doric facade for the principal storey with pitched clay tile roofs, arcaded verandahs and timber-louvered French windows that used to keep the interior cool and well ventilated in Singapore’s tropical climate before air-conditioners were installed and which caught the attention of many migrants sailing into Singapore harbor over the years.

Today, this white two-storey edifice houses the Asian Civilisations Museum that ambitiously tries to pull together the various threads of Asian civilizations, from the Middle East to China, thus helping to better understand and appreciate all the different cultures that went into making Singaporeans what they are – a cosmopolitan nation.

Informative and well-presented, with special exhibits not often seen in public, this museum has a few highlights worth mentioning, starting with the Hindu-Buddhist gallery and its beautifully-lit displays featuring a stunning 18th-century Burmese Buddha head and a large bronze drum. The Chinese influences are also well represented, from tomb remains to ceramics over a thousand years old that have been recovered from a shipwreck found in 1998. All in all, the recovered cargo comprises more than 60,000 well-preserved pieces, including gold and silver items produced in China during the Tang dynasty. In the small Malay World section, look out for a spectacular Kelantan Makara, a huge goggle-eyed mongrel creature once used in rituals, while elsewhere you will find exquisite examples of porcelain, textiles, lacquerware, costumes and traditional huge procession statues.

The museum also has a restaurant, called “Empress”, serving traditional Chinese cuisine in a contemporary waterfront setting, plus a cafe, called “Privé ACM”, where you can relax at the alfresco area, enjoying view of the Singapore River and the city's business district skyline. The museum shop carries souvenirs and a wide range of books on Asian art.

Tip:
You can take one of the free English tours which are very worthwhile, usually beginning in June and running at 11:30am, 1:30pm, and 3pm most days; and if you plan to go to more than one museum, consider getting a multi-museum pass while you're here.