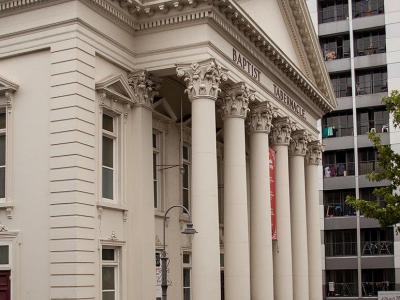 The story of the Auckland Baptist Tabernacle begins in 1881 when Thomas Spurgeon, son of the famous C H Spurgeon, arrived to begin work as a pastor in the colonial town. Thomas’s father C H Spurgeon was a well known Baptist preacher, who to this day is highly considered within the church. With his reputation preceding him, the congregation of the church built steadily and it quickly became apparent that larger premises would be needed to conduct church services. After steadfast fundraising, the foundation stone for the new tabernacle was laid on Easter Monday, 1884 on the central Queen Street site.

The tabernacle has a very different design to that which you see in most other religious buildings in Auckland. The building’s facade features six giant Corinthian columns on a large portico. One of the great supporters of the construction of the tabernacle was Charles Blomfield, who was a sign writer by trade. Mr. Blomfield produced much of the ornate stencilling in the interior of the church on the ceiling of the main auditorium. The Auckland Baptist Tabernacle seems to go from strength to strength and today provides a lot of community support for those of the inner city.
Image by National Library of New Zealand on Wikimedia under Creative Commons License.