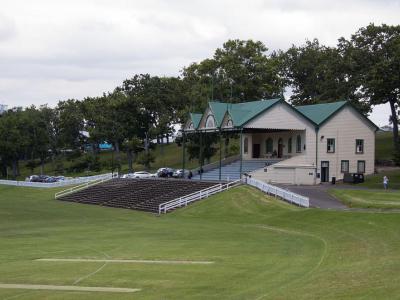 The Auckland Domain is Auckland's oldest park, and at 75 hectares one of the largest in the city. Located in the central suburb of Grafton, the park contains all of the explosion crater and most of the surrounding tuff ring of the Pukekawa volcano.

The park is home to one of Auckland's main tourist attractions, the Auckland War Memorial Museum, which sits prominently on the crater rim (tuff ring). Several sports fields occupy the floor of the crater, circling to the south of the cone, while the rim opposite the Museum hosts the cricket pavilion and Auckland City Hospital. The Domain Wintergardens, with two beautiful glass houses, lie on the north side of the central scoria cone. The fernery has been constructed in an old quarry in part of the cone. The duck ponds lie in the northern sector of the explosion crater, which is breached to the north with a small overflow stream.

Some of the largest annual events are "Christmas in the Park", which in the past has drawn more than 200,000 spectators, and other popular recurring events including the "Symphony under the Stars", the "Lantern Festival", and the "Teddybears Picnic".

Why You Should Visit:
Great place to picnic, walk around, watch cricket, sit in the shade, listen to music in the park or visit the Auckland Museum and the Wintergardens.

Tip:
If you like walking, make a whole day of it by starting in Mount Eden, then going to Newmarket and the Auckland Domain.
During the summer there are loads of events that take place here, so always worth checking if there's anything happening.