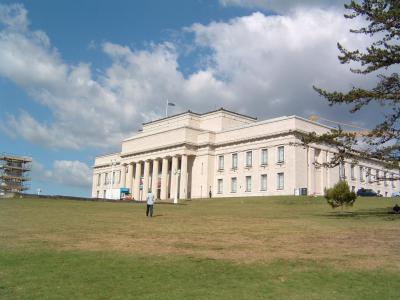 Auckland Museum is one of New Zealand's most important museums and war memorials. Its collections concentrate on New Zealand history (and especially the history of the Auckland Region), natural history, and military history.

The museum is also one of the most iconic Auckland buildings, constructed in the neo-classicist style, and sitting on a grassed plinth (the remains of a dormant volcano) in the Auckland Domain. The copper and glass dome, as well as the viewing platform–event centre underneath it, quickly won the admiration of critics and public, being noted for 'its undulating lines, which echo the volcanic landscape and hills around Auckland'. Standing in the event centre underneath the top of the dome was likened to being underneath the 'cream-coloured belly of a giant stingray', 'with its rippling wings hovering over the distinctive city skyline'. In June 2007, the 'Grand Atrium' project also received the Supreme Award of the New Zealand Property Council, which noted it as being "world-class", and a successful exercise in combining complex design and heritage demands.

The natural history section of the museum is an innovative and vibrant place to visit with a fascinating calendar of events throughout the year. The museum stores a photographic collection of 1.2 million images, and stores and exhibits 1.5 million natural history specimens from the fields of botany, entomology, geology, land vertebrates and marine biology.

There is also an extensive permanent exhibition covering wars, including wars within New Zealand and New Zealand's participation in overseas conflicts. This exhibition is linked to the War Memorial (see below), and shows, for example, models of Maori pā (fortified settlements) and original Spitfire and Mitsubishi Zero airplanes. The Museum holds the largest collection of applied and decorative arts in New Zealand and selections are currently displayed in the Landmarks and Encounters Galleries.

Why You Should Visit:
Great place to sample the history of NZ through the ages. The vista of the port and city skyline from the front door is also one to savor especially during sunset.

Tip:
Do try to time your visit to get tickets for the 30-40min Maori Cultural Performance (daily, 11am, 12pm, and 1:30pm (2:30pm avail Nov-Mar)). Pick up the 'What's On' brochure and select the galleries and themed special exhibitions of most interest. Be sure to also pick up a map at the entrance as the layout is rather confusing.