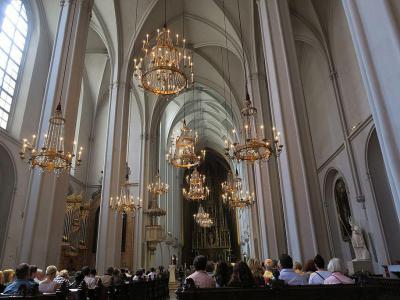 The Augustinerkirche or the Augustinian Church was built to serve the royal court of the Habsburg dynasty. Built in 1339, the church was on the palace grounds but over time the palace expanded and the church is now part of the Hofburg. The church does have a rather beautiful steeple to set it apart from the rest of the facility.

The church includes a cloister for Augustinian friars and today six monks tend to the needs of the local flock. As you can imagine this church has played host to lots of royal functions over the centuries, including the wedding of Archduchess Marie-Louis to Napoleon Bonaparte in 1810. He however, did not show up for the wedding so the marriage was by proxy.

The inside of the Gothic church is starkly beautiful with its tall narrow windows and incredible chandeliers. The cenotaph for Maria Christina of Austria near the rear entrance is moving and lovely. The memorial was sculpted in 1805 and depicts the entire family going into a temple. There are also several chapels in the facility, two of which are open on a limited basis. The Loreto chapel has 54 silver urns that hold the hearts of departed Habsburg rulers and can be viewed thru a windowed door. The bodies are entombed the Kapuzinerkirche.

The best time to see these chapels are after Sunday mass. In the summer the mass features organ music which is breathtakingly beautiful in this setting. Be sure to arrive by at least 10:15 to find a seat for the 11 am mass as this is extremely popular.
Image by Werckmeister on Wikimedia under Creative Commons License.
Sight description based on wikipedia