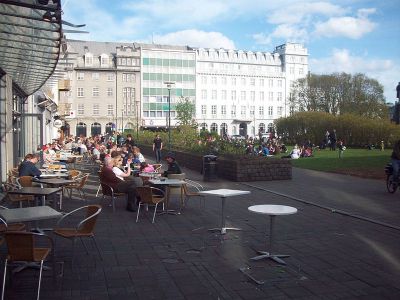 Austurvöllur is a popular gathering place for the citizens of Reykjavik, and especially so in good weather due to the prevalence of cafes on Vallarstræti and Pósthússtræti. It has also been a focal point of protests due to the close location to the Parliament of Iceland.

Austurvöllur is surrounded by Vallarstræti, Pósthússtræti, Kirkjustræti and Thorvaldsensstræti. The latter of which is named after Bertel Thorvaldsen, a statue of whom was, for a long period of time, present in the centre of Austurvöllur, now occupied by a statue of Jón Sigurðsson. Around the square is the Parliament of Iceland building, the city's oldest church the Dómkirkja, the Hotel Borg, and the dance club NASA. Austurvöllur was much larger in the past. In the early 18th century, Austurvöllur stretched from Aðalstræti in the west towards the creek in the east, and Aðalstræti in the north towards Tjörn in the south.

Why You Should Visit:
If Reykjavik had a main town square, this would be it. Not many tourists so you can actually see Icelanders going about their business.
Image by Jóhann Heiðar Árnason on Wikimedia under Creative Commons License.
Sight description based on wikipedia