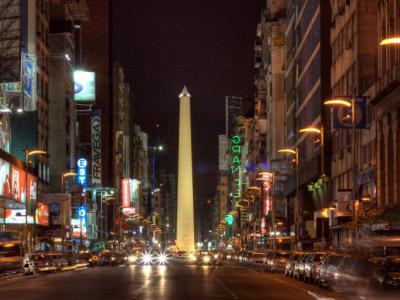 Avenida Corrientes (Corrientes Avenue) is one of the principal thoroughfares of the Argentine capital of Buenos Aires, extending 69 blocks. It takes the name from one of the Provinces of Argentina. Originally, during the 17th century, it was called Del Sol, then San Nicolás (from 1738 to 1808), and De Incháurregui (from 1808 until 1822), when it finally adopted the current name.

Today, when referring to Corrientes prior to its widening, back in the 1930s, the term "Narrow Corrientes" (Corrientes Angosta) is used. The newly inaugurated avenue coincided with the construction of the Buenos Aires Obelisk, one of the city's most recognizable landmarks, in 1936. The name "Corrientes Street" (Calle Corrientes) is often still preferred over "Corrientes Avenue" (Avenida Corrientes) specially on the famous centrical stretch. With that name it appears famously in several tango lyrics.

The street is intimately tied to the tango and the porteño ("port city person") sense of identity. The former is particularly evident in the abundance of commemorative plaques – placed on 40 street corners! – bearing the distinguished names from the history of the tango.

For most of the 20th century Calle Corrientes was a symbol of nightlife in Buenos Aires, traditionally nicknamed "the street that never sleeps". Home to the largest concentration of theaters and cinemas, the area contains some outstanding examples of Art Deco cinema architecture of the 1930s and '40s. Also, with the largest concentration of bookshops, Corrientes has been a favorite haunt for intellectuals since the 1950s, while its famous pizza parlors and restaurants attract city crowds on Fridays or Saturdays evenings – being the standard form of urban weekend entertainment for generations of porteños.

At the farther end of Corrientes – the Luna Park is still synonymous with mass sports and entertainment events, such as box matches or concerts.
Image Courtesy of Wikimedia and Luis Argerich.
Sight description based on Wikipedia.