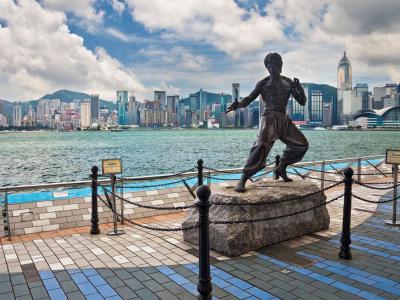 The Avenue of the Stars is Hong Kong's celebration of celebrities who are from or have lived in Hong Kong. It is located at the southern end of the Tsim Sha Tsui Promenade along the Victoria Bay waterfront.

The waterfront walk is teeming with people who enjoy the easy walk along the bay. It also offers many benches for resting, people watching and enjoying the view. The avenue includes a replica of the Hong Kong Film Awards statue, a bronze statue of Bruce Lee and a replica of the 2008 Summer Olympics torch.

Celebrities honored along the Avenue of the Stars include actors, producers, directors, scriptwriters, opera stars and comedians. Also included are some theatre owners, publicity officers and even a cartoon character.

All of those honored have found fame throughout China, though some have reached world-wide notoriety. Those include such famous names as Jackie Chan, Bruce Lee, John Woo, Chow Yun-Fat and Jet Li.
Image by Benson Kua on Flickr under Creative Commons License.