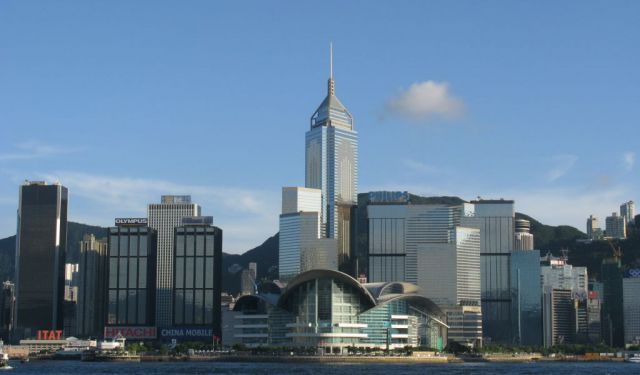 Causeway Bay is well known for its mega shopping malls and skyscrapers that lie adjacent to its rustic streets and picturesque corners. All of this makes it a popular destination with locals and tourists alike. To help you explore Causeway Bay, we have compiled an easy-to-follow self-guided walking tour covering the most notable attractions in the area.
Image Courtesy of Wikimedia and Baycrest.
How it works: Download the app "GPSmyCity: Walks in 1K+ Cities" from iTunes App Store or Google Play to your mobile phone or tablet. The app turns your mobile device into a personal tour guide and its built-in GPS navigation functions guide you from one tour stop to next. The app works offline, so no data plan is needed when traveling abroad.

Times Square is considered the first of its kind, the first "vertical mall" in Hong Kong. Due to the high land price in Hong Kong, and the higher yield on retail property, Times Square departs from the common western model of the flat shopping mall. The space allocated to retail is configured over 9 stories. The mall and lifts to the office tower are accessible by long escalators linking the ground floor podium and the first level of the mall.

Why You Should Visit:
Definitely a mall suitable for all ages, styles, and budgets; a couple of big luxury brands occupy the first 2 floors. The brands then start to turn to a mass market for the next 8 floors, while the top floors are for kids and food and also a cinema complex. The basement has a few other more popular and inexpensive shopping brands, and it connects to the metro line. The ground area is a public space and many exhibitions are held there (with some more interesting than others).

Tip:
Unless you hit a shop when they are having a sale, you won't find any "bargain" shopping here, just because of the location.


Image Courtesy of Wikimedia and Terence.
2

During the late 19th Century, Hong Kong was plagued by the increasing abduction and trafficking of women and children. These crimes were increasing in frequency and becoming a serious problem for the people of Hong Kong. On the 8th of November in the year 1878, a group of local Chinese people presented a petition to Sir John Pope Hennessy, the Governor of Hong Kong to set up the Po Leung Kuk in order to rescue the kidnapped victims.

“Po Leung”, translates to “protection of the young and the innocent” from the Chinese language. The organization has protected destitute women and children, prevented and resolved kidnappings, and also assisted the Secretary for Chinese Affairs (under British rule) in many matters.

Sogo is a Japanese of departmental store chain, having also branches in Hong Kong, of which the one in Causeway Bay is the most famous. It is actually a 13 storey mall, covering a wide variety of stores and dining places. It is a very popular hang-out place for residents and tourists.
Image Courtesy of Wikimedia and Minghong.
4

Victoria Park is a public park in Hong Kong furthermore one of Hong Kong's central attractions. The park is named after Queen Victoria of the United Kingdom. It is located in Causeway Bay, on the north of Hong Kong Island. It is part of Wan Chai District, bordered by Victoria Park Road and then Victoria Harbour to the north and Causeway Road and Hong Kong Central Library to the south. The park underwent a major revamp in the early 2000s, which gave it many of its new and rebuilt features, including basketball courts, tennis stadiums, and swimming pool.

The park was formerly a typhoon shelter known as Causeway Bay Typhoon Shelter, part of Victoria Harbour, used as a refuge by fishing boats and yachts during typhoon seasons. In the 1950s, the shelter was reclaimed and the park was built there. The park has long been a gathering place for domestic workers on Sundays, their usual day off.

There is a statue of Queen Victoria, seated, at the main entrance of the park on Causeway Road. This statue was originally located in Statue Square. The park includes tennis courts, a swimming pool, a bowling green and other sports facilities such as the central lawn, basketball courts, football pitches and multiple children's areas and playgrounds.

Every year, in the days preceding Chinese New Year, the park is home to the Lunar New Year Fair (年宵市場), which attracts large crowds late into the night. Other large events in the park include the Hong Kong Brands and Products Expo and the Hong Kong Flower Show.
Image Courtesy of Flickr and Francisco Anzola.
Sight description based on Wikipedia.
5

The Noon Day Gun is a former naval artillery gun, mounted on an enclosed site located near the Causeway Bay Typhoon Shelter in Hong Kong. The gun is owned by Jardine Matheson and fired at noon every day. The Noonday gun is a popular tourist attraction.

Originally known as East Point, the Noon Day Gun is now located on a part of Causeway Bay. In 1841, East point was sold by the British colonial government in Hong Kong by public auction. This was the first plot of land to ever be sold in this way by the colonial government and it was purchased by Jardine Matheson. The name, East Point has now been disused, due to a drastic change in the geographical profile of the area caused by land reclamation.

During the 1860s, the private militia of Jardine Matheson used to fire a gun salute in order to welcome Jardine’s arrival by sea. This annoyed a senior British naval officer who declared that such a salute is reserved for government officials and the senior officers of the armed forces only. He ordered Jardine Matheson to fire the gun everyday at noon for perpetuity. This launched the tradition of the Noon Day Gun, firing at noon every day, even today.
Image Courtesy of Wikimedia and Baycrest.