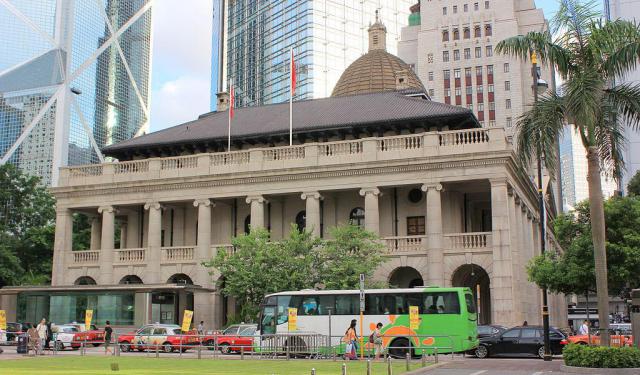 Having been a British colony for over a century, Hong Kong has kept many of its colonial buildings until today. The majority of these old buildings are in the Central district of Hong Kong; some of them have been declared national heritage objects. Take this self-guided walking tour to visit the most important colonial buildings in Hong Kong at your own pace.
Image Courtesy of Craddocktm.
How it works: Download the app "GPSmyCity: Walks in 1K+ Cities" from iTunes App Store or Google Play to your mobile phone or tablet. The app turns your mobile device into a personal tour guide and its built-in GPS navigation functions guide you from one tour stop to next. The app works offline, so no data plan is needed when traveling abroad.

Flagstaff House is the oldest example of British-style architecture remaining in Hong Kong. It is located in 10 Cotton Tree Drive, Central - within the Hong Kong Park.

It has been a longtime residence of the Commander of the British forces in Hong Kong during colonial times. In 1984, the Flagstaff House was converted into the Flagstaff House Museum of Tea Ware, a branch museum of the Hong Kong Museum of Art. The museum specializes in the collection, study and display of tea-ware, including many samples of the Yixing teapot, from Jiangsu Province of China, as well as the world's oldest known extant teapot.

Image Courtesy of Wikimedia and BrokenSphere.
Sight description based on Wikipedia.
2

The structure was constructed on reclaimed land, and was opened to public on the 15th of January in the year 1912. Neo-classical architecture was used to design the building, and the 2 storey granite structure is supported by Ionic columns. The building is surmounted by a blind folded statue of Themis, the Greek Goddess of Justice and Law. This statue is identical to the statue erected on the Old Bailey of London.

The building had to undergo restoration in 1978, as it was severely affected by the construction of the Mass Transit Railway. The Legislative Council Building is one of the 92 declared monuments of Hong Kong.

Image Courtesy of Wikimedia and Baycrest.
Sight description based on Wikipedia.
3

The Court of Final Appeal of Hong Kong is the court which has the final adjudication power on all the laws of the city of Hong Kong. It is located in the Former French Mission Building, in the Central district of Hong Kong Island.

On the first of July in the year 1997, Hong Kong’s sovereignty was transferred from the United Kingdom to China. Before this time, Hong Kong was under British rule and the powers of final adjudication on its laws were with the Judicial Committee of the Privy Council in London. After gaining sovereignty from the United Kingdom, the Court of Final Appeal was established in Hong Kong.

The court is housed in the Former French Mission Building, which was originally a mansion called Johnston House. During the 1870s and 1880s the building was altered into a 3 storey building. The present building was constructed in 1917, and its design is based on “Beaconsfield”, a structure near the site of the French Mission Building. The building has a red brick facade, and is built in an Edwardian period, neo-classical style with granite blocks. The structure was constructed on a podium due to the hilly areas of the Government hill in Hong Kong.
Image Courtesy of Wikimedia and Craddocktm.
4

There are only five cathedrals in all of Hong Kong. The oldest is the Cathedral Church of Saint John the Evangelist, otherwise known as St. John's Cathedral. Like Holy Trinity Cathedral and All Saints' Cathedral, St. John's is Anglican. The other two Hong Kong cathedrals are the Cathedral of the Immaculate Conception and St. Luke's Orthodox Cathederal, which are Roman Catholic and Eastern Orthodox, respectively.

St. John's Cathedral was completed in 1849 and consecrated in 1852. It is not just the oldest cathedral in Hong Kong but the oldest Anglican church in the Far East. The architectural style is English Gothic Revival. The cathedral is fashioned from stucco and wood.

Visitors to Hong Kong are welcome to attend services at St. John's Cathedral. It is open for regular services on Saturdays and Sundays. On Mondays, the cathedral hosts a meditation service from 12:30 to 1 PM.

The cathedral grounds have ample seating for those who want to enjoy some peace and relaxation in the midst of the bustling Garden Road. Adjacent to St. John's Cathedral is Cheung Kong Park, which offers excellent views of the cathedral's clock tower while providing a quiet walking path lined with greenery.

Why You Should Visit:
Exquisite church in the heart of the city jungle with peaceful and pretty courtyard seating.

Tip:
Very often, you will find Wednesday lunchtime performances. There's even a cafe on the grounds called The Nest with a lovely selection of hot & cold drinks, biscuits, pies, etc.

The Government House is located on the Government Hill in the Central district of Hong Kong. This house is the official residence of the Chief Executive of Hong Kong. The structure was built in 1855 as a Colonial Renaissance style home, but during the Japanese occupation, it was significantly remodeled. Today the building has a hybrid Japanese-Neoclassical structure with a tower and roof elements, added by Japanese architect Seichi Fujimura in 1944.

The House was designed by Charles St George Cleverly and its construction started eight years after Hong Kong was declared a British colony in 1851. The first Governor to reside in the Government House was Sir John Bowring. In 1891, a Ballroom was added to the original house for social functions. Even during the Japanese occupation, during World War II, the Government House was occupied by the official Japanese Military Governor.

Today, the Government House is home for the Chief Executive of Hong Kong. The current structure has been extensively renovated, and an elaborately expensive fish pond has also been added.
Image Courtesy of Wikimedia and WiNG.
6

The Old Dairy Farm Depot is a Nineteenth Century building that currently houses the Foreign Correspondents' Club (in the North Block) and the Hong Kong Fringe Club (in the South Block). It is located at number 2 Lower Albert Road in the Central district of Hong Kong. The edge of the building faces Glenealy while its back faces Wyndham Street.

In 1890, a low-rise, brick and stucco structure was constructed on Lower Albert Road by Dairy Farm in Central Hong Kong. This building was used as a cold storage warehouse, initially. Later in 1913, this warehouse was expanded and renovated in order to include a dairy shop, a cold storage room and a room for meat smoking. The cold storage room was used to store winter clothing. A residency for the General Manager of the company was also added later.

During the 1970s, the company moved and the building was abandoned. The Hong Kong Fringe Club acquired the abandoned building in 1984. The Fringe club renovated the building extensively to make it a vibrant place for the contemporary arts. The Old Dairy Farm building has won the Hong Kong Government Heritage Award and it has been categorized as a Grade II Historic Building in Hong Kong.
Image Courtesy of Wikimedia and Chong Fat.
7

The Central Magistracy is located in the Central district of, Hong Kong Island on Arbuthnot Road. It was commissioned in 1913 and its construction was completed in 1914. The Central Magistracy stands on the original site of the first Hong Kong Magistracy built by the British. This building was one of the first erected by the British upon their arrival in Hong Kong. The former structure dated back to the mid nineteenth century, circa 1847, and was demolished in order to make way for the new building and additional blocks.

The present Magistracy building features the Greek-revival style, with imposing pillars of the facade, and has an overall majestic appearance. The walls of the building are made of granite blocks. A basement has also been added in the new design, and this provision caused much delay in the construction work.

The Central police station is located in the Central district of Hong Kong, at the eastern end of Hollywood Road. This site actually dates back to the middle of the Nineteenth Century when the British first came to Hong Kong.

Due to the ever changing social, political and operational changes that have occurred in Hong Kong over the last century and a half, these structures have been repeatedly modified and altered.

A 3 storey barrack block, constructed right next to the Victoria Prison in 1864, is the oldest structure within the police station. In 1905, another storey was added, plus several more between 1910 and 1925. During this period, many people moved from mainland China to Hong Kong, and many police stations had to be built in order to maintain law and order in the increasing population.