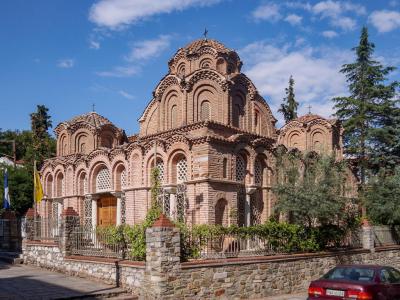 The Church of Saint Catherine (Greek: Ayia Katerini) is a late Byzantine church in the northwestern corner of the old city of Thessaloniki. The church dates to the Palaiologan period, but its exact dating and original dedication are unknown. From its interior decoration, which survives in fragments and is dated to circa 1315, it has been suggested that it was the katholikon of the Monastery of Christ Almighty. It was converted to a mosque by Yakup Pasha in the reign of the Ottoman sultan Bayezid II (1481–1512) and named after him Yakup Pasha Mosque (Turkish: Yakup Paşa Camii). In 1988, it was included among the Paleochristian and Byzantine monuments of Thessaloniki on the list of World Heritage Sites by UNESCO.
Image by C messier on Wikimedia under Creative Commons License.
Sight description based on wikipedia