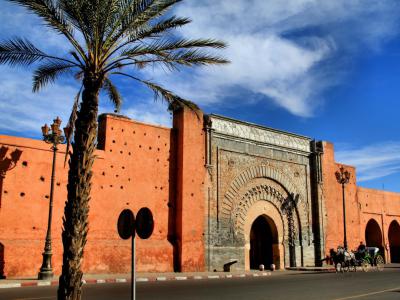 When the old city of Marrakech was founded under the Almohad dynasty, it was surrounded by protective walls with a total of 19 huge gates in it guarding entry into the city. Bab Agnaou, located in the southwest corner of the city, is certainly the most noteworthy of all those remaining; a remarkable piece with rich decoration echoing the 12th-century fortification design and embellishments. At some point, this gate served as an entrance to the medina's El Badi Palace – home to the royal family – and as such was more of a decorative than defensive feature.

Its entryway appears as a large horseshoe arch with concentric circles of symmetrical carvings – four semi-circular carved arcs, one over the other, with geometric floral patterns and a frieze along the top inscribed with verses from the Koran (in Kufic lettering). The gate takes its blue/ochre color from the Gueliz sandstone of which it is built. The two broken areas at each end of the top suggest that two slender towers once stood in this place, which in turn may account for the name Agnaou, which means "sheep without horns" in ancient Berber.

Today, the Bab Agnaou gate makes one the best photo opportunities in the old city of Marrakech, a UNESCO World Heritage Site.
Image Courtesy of Wikimedia and Lionel Leo.