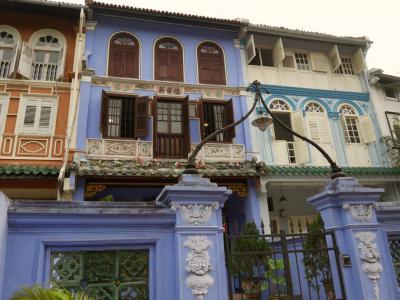 Baba House (also referred to as NUS Baba House) is a museum in Singapore, showcasing Peranakan history, architecture and heritage. It is a traditional Peranakan pre-war terrace-house which was formerly owned by the family of a 19th-century shipping tycoon Wee Bin who settled in Singapore, after arriving from the southern Chinese province of Fujian.

Built in the 1890s, 157 Neil Road is a residential terrace house located in the Residential Historic District of Blair Plain. The house came into the Wee Family in 1910 when a matriarch of the family bought the house for her grandson, Wee Eng Cheng. The house was last owned and managed by Mr Wee Lin, the sixth-generation descendant of Wee Bin. The Bin family donated house to the National University of Singapore for educating younger generations about Peranakan history, culture and architecture.

About 70 per cent of the furniture in the House belonged to the Wee estate, while the rest of the items were acquired from Peranakan families in Singapore and Malacca. The first two storeys of the House showcase the Peranakan domestic interior, while artists showcase modern interpretations of Peranakan culture through the exhibition gallery on the third storey. At the same time, the House will also be a venue for Peranakan culinary and craft workshops to be organized by Musem of the National University of Singapore.
Image by Franklin Heijnen on Flickr under Creative Commons License.
Sight description based on wikipedia